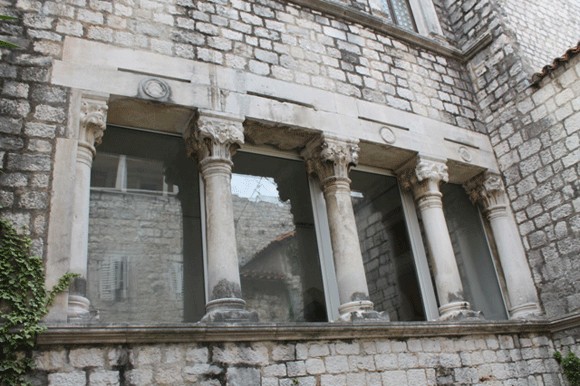 The exterior of Kinoteka ZlatnaVrata, Split

This month we spoke to Snježana Lisičić, director of Kinoteka Zlatna Vrata (The Golden Gate), which is part of the Centre for Culture and Lifelong Leaning located in the old centre of Split, Croatia.

Zlatna Vrata has a long history and it was a key cinema in the former Yugoslavia, having opened in 1971. It is now a centre for film enthusiasts in a city with a reputation as a city of film lovers. Snježana Lisičić told us that the attendance increased in 2013 compared to 2012. She also told us what her cinema is doing in order to attract young audiences, given the fact that all across Europe youngsters are not going to cinemas which do not show blockbusters.

FNE: What is the biggest challenge of running a cinema such as yours?
Snježana Lisičić: To keep and maintain the number of people who like classical and art film cinema. We try to keep their satisfaction high. We call it kinoteka, but there is no archive, so people expect a high standard of programme.  There are not a lot of visitors compared with 20 years ago. There used to be huge queues for membership tickets. We probably won’t see those numbers again, but it is increasing. We had an increase of 700 attendances in 2013 over 2012.

FNE: What kinds of films do you prefer to screen and why?
S.L.: We show international classic cinema, including black and white and silent, and art movies from different film festivals, prize-winners from Berlin, Cannes and so on. We mark different anniversaries in cinema. We recently held a Fellini retrospective 20 years after his death. We also have an exhibition space, so we showed some of his caricatures as well.

FNE: The cinema is home to many festivals, events and film weeks. Why are these important and what do they achieve?
S.L.: Our premises are used by two film festivals. Split Film Festival, the International Festival of New Film, which has been running for nineteen years and runs from 13-20 September this year. The Mediterranean Film Festival Split has used the venue for the last six years. It takes place every year in June. It focuses on non-mainstream Mediterranean film, including Middle East and North Africa. These festivals receive funding from the city and the government.

FNE: What is role of Europa Cinemas for cinemas such as your cinema and why is it important?
S.L.: We have to connect somehow with similar cinemas in Europe to see what we can do together. Together we are stronger. Joining with other cinemas gives us opportunities to link and network with similar cinemas elsewhere. For the last two years two of our colleagues have attended a networking/workshop event in Bologna.

FNE: How does a cinema like yours serve the local community?
S.L.: We work with foreign consulates, for instance putting on days of French and Italian film. We recently had a programme of new Italian film. We have days of new Croatian films. We co-operate with film festivals in Croatia: Vukovar, Zagrebdox, Motovun Film Festival, Pula Film Festival, etc. We try to bring some of these films to our Kinotek. It raises our profile and draws audiences.

We continually survey our audiences. For instance we have recently changed the format of our monthly programme to make it more accessible. We have a marketing person who promotes films in the city through radio, local TV and the press. Our connection with the local community is not just through cinema. We use the venue for promoting books, forums, lectures, panel discussions. Each year in April there is a Festival of Science organised with University of Split and the British Council. It’s been running for at least six years. We held a week of Christian culture, including films, workshops and book promotions.

FNE: Can you say something about your work with young audiences?
S.L.: There is a lack of young audiences for this type of cinema across Europe. We try different activities to attract young audiences.  Youngsters grow up with all kinds of information devices, and they don’t have the habit of going to the cinema, especially in our cinema as we don’t show blockbusters.
We cooperate with elementary and secondary schools. We are in contact with their teachers, we show films that are linked with teaching. For instance, if they are learning about Tolstoy, reading Anna Karenina, we can show them the film. A lot is dependent on enthusiastic teachers.
The festivals we host include workshops for children and youngsters, and this is part of our work encouraging young people to visit the cinema.

FNE: What about the digitalisation of cinemas? How will it affect your work and your cinema?
S.L.: We had a digital projector installed at the end of 2013. This was part of bigger project from the Croatian Ministry of Culture and included funding from Europe. 25 cinemas were digitalised at the same time. We had support from the City authorities as well. It’s now easier to show films and more films are accessible. But we do have film enthusiasts who like the things that go with showing 35mm films, such as the sound of the film being played! We can still project 35mm as well.

Contact
Kinoteka ZlatnaVrata
Dioklecijanova 7
21000 Split
Phone: 021/ 361 524
Fax: 021/ 361 201
This email address is being protected from spambots. You need JavaScript enabled to view it.
www.zlatnavrata.hr