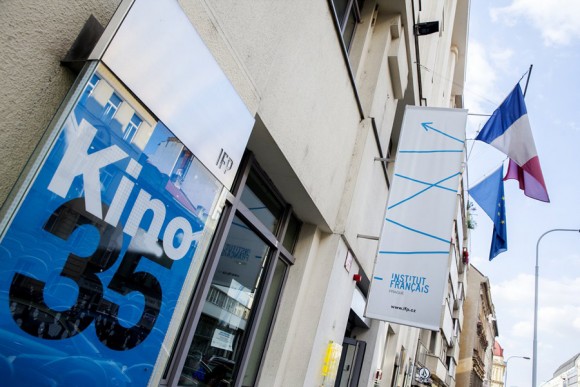 This month we speak with Christelle Havranek, the programmer of Kino 35, the cinema of the French Institute in Prague. Kino 35 is screening mostly European movies including French language films. It is located in the heart of Prague in a cultural center which also has a gallery, a cafe, a bookstore, a library and a language school.

Kino 35 hosts many cinematographic events such as film festivals, retrospective seasons, meetings and advance movie screenings, and has been a member of Europa Cinemas since January 2015. In 2014 this cinema with 203 seats sold more than 16,500 tickets.

Christelle Havranek: Since 2013 we have been offering a programme focusing on European and international films even if, given its history and localisation, Kino 35 is merely perceived as a space for French films. Therefore, our biggest challenge is to become attractive for the non-French speaking audience.

C.H.: We like screening innovative films, films which question the form and the image, but also the content and the author's point of view. However, we are open to all genres, because we want to appeal to a broader audience.

C.H.: We organise the French Film Festival and we also host various festivals each year of which the most important are One World International Human Rights Documentary Film Festival and Queer Film Festival. The festivals, the retrospectives, the meetings with film professionals and the workshops are essential for building a dialogue with our audience and thus gaining its trust.

These events are also a way of reaching various communities and interacting with various domains such as visual arts, literature, architecture, education, and this is exactly the goal of a multi-disciplinary centre like the French Institute.

C.H.: Europa Cinemas is a great network which allows the European exhibitors and programmers to exchange and share their experiences mostly during the annual meetings. The blooming of new technologies created a mutation in consuming films.

Therefore, we have to reconsider the programming and the welcoming of the audience following standards which are very different today to what they used to be at least 10 years ago. However, the financing from Europa Cinemas helps art houses such as ours to resist the multiplication of the multiplexes, and this is of utmost importance.

C.H.: Compared to other art house cinemas in Prague, Kino 35 has something of its own: it is located in a historical institute (opened in 1920) which also hosts a media library, a gallery, a cafe, a research centre and which also organises language courses.

It is obvious that our cinema has its own role in connecting all these spaces. As a result the eclectic programming takes into account the diversity of the audience visiting the institute. In order to be accessible to a larger number of people, particularly to the international community living in Prague, all our films are screened with subtitles.

C.H.: We organise several activities for younger audiences. One of them is screenings for pupils subsidised by the French Institute for the implementation of the project Education in Cinemas in Czech Republic. Inspired by the cinema education platforms functioning in France, this programme comprises pedagogical sessions connected to the Czech educational system. Some sessions are presented by a film historian who discusses the film with the children after the screening.

Every month Kino 35 hosts a cineclub for children and teenagers in partnership with the international bookstore Amadito &Friends. On the occasion of each screening we propose to the young audience a selection of books connected to the theme of the film. These sessions are often accompanied by workshops held by professionals.

C.H.: Since the digitalisation of the cinema, programming changed significantly because digitalisation gave us the possibility of running new films. Kino 35 is now a professional cinema on the same range as the other art house cinemas located in the center of Prague. Digitalisation also increased the number of screenings and brought us the Europa Cinemas label in January 2015.