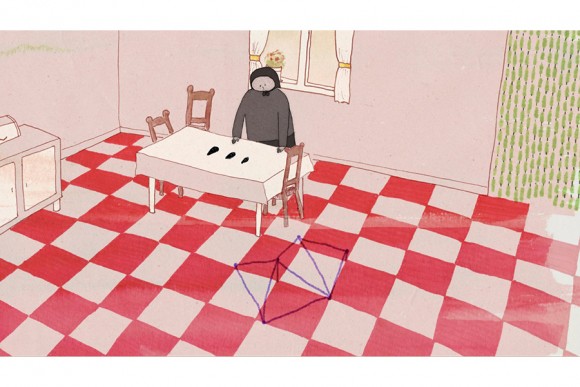 Žilina. Slovakia. The 9th Fest Anča International Animation Festival ended on Sunday 3 July 2016 at the New Synagogue in Žilina. The main Anča Award, which carries a financial reward of €800, went to Spain and the directors María Álvarez and Elisa Morais for their film Three Fitted Flies (Tres moscas a medida).

The international jury, composed of Barbara Janišová Feglová (SK), Thomas Renoldner (AT), and Vassilis Kroustallis (GR) stated that: “The winning film creates and recreates its own narrative and visual space with inventiveness and constant surprises. Beguilingly simple in its visual design, it engages the viewers with its quirky atmosphere, but also the very personal feelings of the main character, hidden under a fly’s wings.” The film depicts a small village in a plain and arid region of central Spain, where an old woman tries to bring her late husband back by means of twisted rituals.
The jury also awarded two special mentions. Celine Devaux’s film Sunday Lunch (Le repas dominical) earned a mention for “a very personal story that metamorphoses into the most interesting Sunday evening, with the protagonist being devoured by his family, the cosy monochromatic backgrounds, and the menacing sound design.” The second special mention went to France and to Samuel Yal for his film Nœvus, a fascinating dialogue between the art forms of sculpture, dance, and animation. The jury was “astonished to watch how numerous tiny particles of porcelain are transformed into fluid ocean waves and to experience the fragility of a human corpus, forming, and dissolving.”

Frederic Siegel’s animated short Ruben Leaves received the Anča Student Award, which has prize money of €400. “Using a particularly impressive simplistic graphic design, which is reduced to a few pastel hues, the film thematises the obsession of neurotic compulsive thoughts,” revealed the jurors. “Here, animated film is just the perfect medium to switch from reality to fantasy and even dissolve the borders between them when the story gets more and more absurd.” A special mention was also awarded to the student film Cosmoetico by Martina Scarpelli from Italy.

The international music video competition was won by Esteban Azuela from Mexico for the video clip State of Amnesia (Amnesia en el estado), which he created for the punk formation Los Viejos. In addition to the Anča Music Video Award statuette, he also received €400. According to the jurors Olga Bobrowska (PL), Steven Woloshen (CND) and Martin Buřil (CZ), the video stood out “for its depiction of brutality and hostility that is based on a fresh combination of animation techniques and media language.” A special mention was awarded to the video clip that Dave Merson Hess created for the song Now It’s Over by the band A Place to Bury Strangers. The jury found it “exploratory, courageous, and intuitive.”

Just like last year, animated films for children competed in the Anča Kids’ Award section. The winning film, One, Two, Tree by the French director Yulia Aronova, was selected by a special children’s committee assembled in the screening hall. The winner was awarded €400.

The Anča Slovak Award along with prize money of €600, kindly supported by the Slovak Literary Fund, was awarded by a jury composed of Vanja Andrijević (HR), Katarína Moláková (SK), and Alexander Stein (DE) to Marta Prokopová’s film Mila Fog. “The film brings a subtle associative story that gives us a space for interpretation and creative participation. The combination of different visual styles and their transformation comes very naturally and fluently. The magnetic visuals, together with a bold and fascinating sound design, bring an essential experience to the audience. The high confidence of the director’s decisions about all of the film’s elements and the timing of it led to a wholesome piece of art.” The jury awarded a special mention to Zuzana Žiaková’s Brother Deer “for her mastery of classical stop-motion puppet animation in the film, which presents a traditional tale combined with surreal elements.”