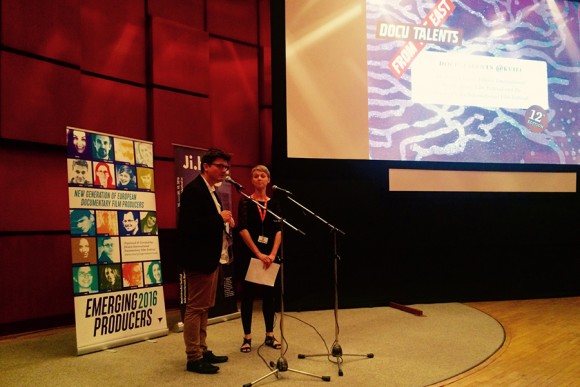 The twelve most remarkable documentaries from Central and Eastern Europe, planned for theatrical release during the upcoming 12 months, were presented today at the Karlovy Vary IFF.

Projects from the Czech Republic, Georgia, Hungary, Poland, Romania, Russia and Slovakiamade it to the final selection of Docu Talents @KVIFF 2016. The presented films ranged from "a collective image of a Russian man", composed of dashcam videos from all over Russia posted on YouTube (The Road Movie by Dmitrii Kalashnikov) to a "a blend of opera and documentary film" (Opera about Poland by Piotr Stasik).

"Docu Talents introduced upcoming films made by distinctive Eastern European documentary filmmakers. Among them were also Romanian director Ionut Piturescu, whose short doc was one of the winners at the Cannes IFF a few years ago, Levan Koguashvili who kicked off the Georgian new wave with his fiction films presented at film festivals in Rotterdam, Toronto or Berlin, or the duo of filmmakers Vít Klusák and Filip Rumunda whose Pepik the Czech – a third part of their loose trilogy – follows up on their Czech Dream and Czech Peace. The film ship is thus obviously keeping steady in the documentary direction.

Films presented at the Docu Talents in the previous year, premiered at festivals in Rotterdam, Jihlava, Nyon, Karlovy Vary, at IDFA, and in Leipzig. We wish these newly introduced films every success in the upcoming months as well as the attention they deserve,” says Marek Hovorka, director of the Jihlava IDFF, which is the project’s curator.

Reflecting the increased interest on the side of the film professionals, distributors and film festival representatives, the organisers – the Jihlava IDFF and Karlovy Vary IFF – decided to move the event to a bigger location this year – the Congress Hall of the Thermal Hotel.

"Each October, Jihlava IDFF offers a great showcase of new talents on the documentary scene in the region. We are happy that thanks to this traditional collaboration with Karlovy Vary IFF we can give the documentary filmmakers from Eastern Europe yet another opportunity to present their work", says Jarmila Outratová, Head of Industry at Jihlava IDFF.

Since 2005, Docu Talents has been a launch pad for a number of documentaries, including Rabbit a la Berlin, Blind Loves, Matchmaking Mayor, The Mosquito Problem and Other Stories, Cooking History, René, Fortress, Pipeline, Daniels´s World and Under the Sun. Two of the 2015 Docu Talents projects – FC Roma and Close Relations – made it to the documentary competition of this year's Karlovy Vary IFF.

During the event, the representatives of the Jihlava IDFF also revealed the names of the Emerging Producers 2017. This unique programme aims at promoting talented European documentary film producers and provides them with a range of networking, educational and promotional support throughout the year. 16 European producers will be accompanied by two producers from Mexico, which is the guest country of the 2017 Emerging Producers programme.

René Kubášek
International Communication | Jihlava IDFF
This email address is being protected from spambots. You need JavaScript enabled to view it.
+420 778 058 273

Tweet
More in this category: « The Anča Award Goes to the Spanish Film Three Fitted Flies CentEast Market, 14-16 October 2016 - call for submissions! »
back to top