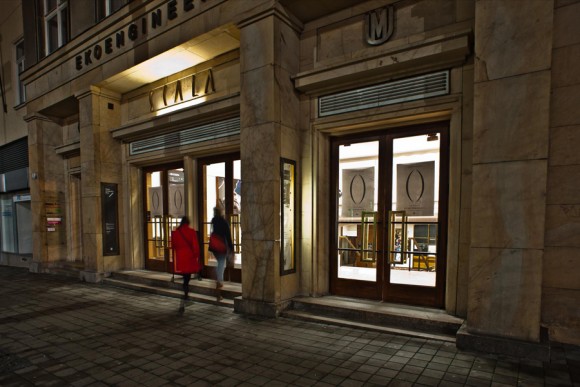 This month we speak to Radim Habartík, one of the managers of Kino Scala, a single screen cinema located in the center of Brno, the second largest city of the Czech Republic. Kino Scala is a modern art house cinema offering a wide range of quality films and alternative content, as well as exhibitions, happenings, lectures, concerts etc.

The cinema is fully digitalised and offers the quality of 4K and 3D screenings. It has 475 seats, but additional 50 seats can be found in the café which also hosts some of the video screenings, film quizzes, lectures etc.

FNE: What is the biggest challenge of running a cinema such as yours?
Radim Habartík: Scala was closed by the municipality in 2011 when it could not compete with the newly opened multiscreen cinemas in Brno any longer. The closing of Scala led into a big public debate and protests, the voices coming from the Masaryk University being the loudest. The University soon started to negotiate with the city and Aeropolis, a company owned by the managers of Prague-based cinemas Aero, Oko and Světozor.

Negotiations were successful and led to the re-opening of Scala in October 2013, after a light reconstruction of the interior design and digitalisation. It wasn’t easy to restore the cinema’s reputation. The biggest challenge was to find a model of mutual cooperation between the Masaryk University, which rented the cinema from the City, and our company Aeropolis, which is basically managing the cinema. In other words, to find a way for the cinema to fulfill both its cultural and entertaining role together with the newly established role of an educational and university centre. We had to find a way to manage the cinema in close cooperation with the Masaryk University and also other cultural institutions in Brno.

It wasn’t easy and took a lot of experimenting, making mistakes and finding compromises, but at the moment Scala is among the three top single-screen cinemas in the Czech Republic in terms of admissions. Time proved that what at the beginning looked like the biggest challenge  – combining the university's needs with the needs of a cinema that screens regularly, several times a day – is now the biggest advantage, bringing to Scala a broad specter of supporters, fans, partners and, of course, viewers.

Radim Habartík: Scala profiles itself as an art house cinema but its reach is broader, let’s say from hard core art to quality mainstream. We screen experimental films, documentaries, art house classics, digitally restored classics, student films, etc. but we are not afraid to screen e.g. the latest James Bond or Star Wars as these titles have a strong base of fans who expect Scala to offer also these titles. Scala serves as a community cinema and we are here to offer quality film entertainment and education at the same time.

Radim Habartík: These events and festivals are essential for us for several reasons. They provide unique content, usually films which are not likely to be distributed in theatres or are very special. They not only help us keep the diversity of our programme, but also bring new audiences, members of various subcultures and social groups.

They also sort of help us keep our eyes open in our search of interesting offer, or better said: it keeps us thinking out-of-the-box when thinking about our cinema as a vital meeting point for various audiences. They also support the visibility of the cinema in local and national press, of course.

Radim Habartík: The support of Europa Cinemas is essential in our efforts. It’s not just the financial support, but the fact that we were able to join this prestigious network quite soon after the re-opening of Scala. It sort of assured us that how we are managing Scala is the right direction. Europa Cinemas provides a lot of inspiration and experience exchange (as e.g. at the recent annual conference held in Prague).

Radim Habartík: I think that we succeeded in our effort and managed to use Scala as a social space playing all the roles we’d like to play: a cultural and an entertaining role, the role of an educational and university centre. Scala in the mornings “belongs” to the University and hosts lectures, conferences and other educational events (which we’d like to open for the public as much as possible), while during weekends and evenings it’s a regular cinema offering movies, premieres, alternative content, festivals, animation courses etc.

Radim Habartík: Scala is a university cinema, it therefore offers quite a lot of space to university students of film studies to present their activities: they regularly schedule a few slots in our programme, participate in the management of the cinema, learn how to promote their activities. Besides this target group, Scala closely cooperates with the Prague-based project Aeroskola and hosts animation and film workshops for kids between the ages of 4 and 16, as well as weekly screenings for kids and their parents. At the end of August we organize a week of summer city camp during which kids between 8 and 15 learn how to create their own films. All these activities aim to educate our future audiences and develop critical thinking among young audiences.

FNE: What about the digitalisation of cinemas? How is it affecting your work and your cinema?
Radim Habartík: Digitalisation of cinemas is something that was a historical must, otherwise there would be no cinemas any more. We think we are now in a post-digitialisation era when we don’t need to discuss digitialisation itself, but we need to challenge that technological shift with ideas on how to benefit from it. From this point of view, the digitialisation opened brand new possibilities and an ocean of content that can be presented on our screens. Now it’s only up to us how we will transform this technological change into great film miracles and other experiences.