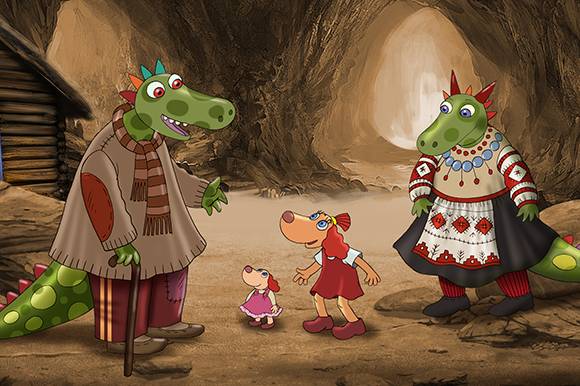 Lotte and the Lost Dragons by Janno Põldma and Heiki Ernits

ESTONIA: Lotte and the Lost Dragons / Lotte ja kadunud lohed, the third full length Estonian/Latvian coproduction featuring Estonia’s most popular animated character, is in production for release in 2019 in the frame of Estonia’s centennial film programme.

Both the first film, Lotte from Gadgetville, and the second, Lotte and the Moonstone Secret, won a string of awards having screened at dozens of festivals, including Berlinale and Annecy.

The budget of the film is 2,721,895 EUR, of which 256,637 EUR is the own investment of Eesti Joonisfilm and 1,533,000 EUR is covered by the Estonian Republic 100 and the Estonian Film Institute. Latvian coproducer Rija Films brings 872,258 EUR. The project was also supported by the Creative Europe MEDIA Programme with the amount of 60,000 EUR.

Lotte’s third adventure starts with two scientists, Karl the Raccoon and Viktor the Fish, arriving in Gadgetville. They are here to participate in an important folksong-collecting competition. Their dream is to record the song of the mythical fire-spitting dragons, so Lotte and her little sister Roosi decide to find the dragons. After numerous adventures, they finally reach the dragons and are met with some surprises.

Director Janno Põldma admits writing the third Lotte film was still a pleasure and the collaboration with co-writers Heiki Ernits and Andrus Kivirähk, a renowned Estonian novelist and columnist, has always been great. “We have come up with an environment, where the children are the main characters, the driving force, but there are adult characters around them, so the films offer something for the viewers of all ages,” he said, explaining that Lotte films were never intended to be specifically children’s films. The characters are born in close cooperation with actors, who lend more than their voices to the film by performing more complicated movements to guide the animators. While both Estonian and Latvian artists are busy creating the visual side of the 78-minute adventure, the music is born on both sides of the border as well with Sven Grünberg composing the score and writing the Estonian versions of the songs and Renārs Kaupers the Latvian versions of the songs.

Production is expected to conclude at the beginning of 2018 and post-production in July 2018.

Eesti Joonisfilm
www.joonisfilm.ee
This email address is being protected from spambots. You need JavaScript enabled to view it.

Rija Films
www.rijafilms.lv/
This email address is being protected from spambots. You need JavaScript enabled to view it.