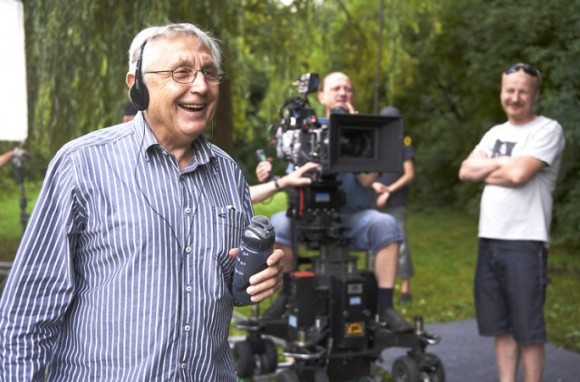 Jiri Mendel on the set of "Skirt Chasers". Photo via www.mediapropictures.cz

WARSAW: Czech director Jiri Mendel is the subject of a 14-film retrospective taking place 6 – 12 May in Warsaw.   Menzel will also be the center of a panel discussion led by Grażyna Torbicka on the TVP 2 program I Love Cinema (Kocham kino) on 12 May 2013.

Menzel is one of the most celebrated and internationally recognized members of the Czech New Wave movement of the 1960’s, famous for his provocative and sarcastic style. He has filmed the works of leading Czech writers Bohumil Hrabal and Vladislav Vančura. His first feature drama Closely Watched Trains won the Academy Award for Best Foreign Language Film in 1968. His film Larks on a String won the Golden Bear at the 40th Berlin International Film Festival, 21 years after its premiere in 1969. The title had been banned by the Czechoslovakia government and was released only in 1990 after the fall of the Communist regime. His dark comedy My Sweet Little Village was nominated for an Academy Award for Best Foreign Language Film in 1986. In 1996 he was awarded a Czech Lion for his life's work and received a Merit Medal of the First Degree from the Czech government. In between films, Menzel is a sought-after theatre director. Menzel was the subject of a retrospective at the recent Czech national film festival Finale Plzen.

His last film, based on the masterpiece by Hrabal, I Served the King of England (2006) was released with great success in the Czech Republic, USA, Netherlands, Poland and Romania. His upcoming film, the 30th of his career, Skirt Chasers (Donšajni) will premiere in May 2013.