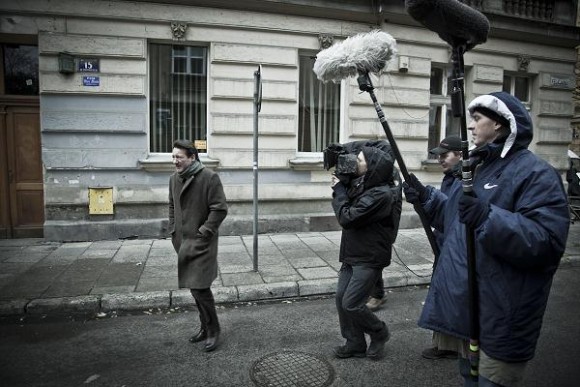 CRACOW: Polish director Wojciech Smarzowski's completes shooting on his drama The Mighty Angel on 18 May 2013, concluding 47 days of filming that began in November 2012.

he script for The Mighty Angel is Smarzowski's adaptation of Jerzy Polich's bestselling novel about an alcoholic man and the people he meets at therapy sessions.

"It was a struggle to get this project started, mainly because my engagement with Traffic Police, which is still in the cinemas and I hear it's doing very well. It was the financing that got us up and running. The Krakow Film Comission was of great help to us when it came to setting up multiple sets," Smarzowski told FNE.

The film is produced by Profil Film Jacek Rzehak with a budget of 6.4 m PLN (1.5 m EUR). The production received 2.5 m PLN from the Polish Film Institute and 600,000 PLN from the Krakow Regional Film Fund. The film is co-produced by Fundacja EDM Plus, HBO Polska, Kraków Film Commission, Telewizja Polska, Mojotribe and Kino Świat.

The leading role is played by acclaimed actor Robert Więckiewicz who recently completed work on the set of Andrzej Wajda's Wałęsa.

"It is a challenging topic - alcoholism. People drink because of so many reasons, to show their background and their issues realistically is a challenge. Smarzowski manages to do that and work very intimetly with the actor to get the best out of him," Robert Więckiewicz told FNE.

The premiere is planned for March of 2014.