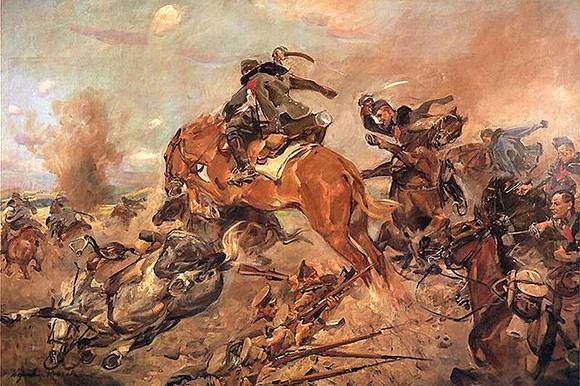 WARSAW: Dariusz Gajewski is currently shooting Legions, a major costume drama about the Polish Legions set up by Józef Piłsudski (1867-1935).

The film will showcase the heroic deeds of the Polish Legions, spanning from 1914 to 1916, starting with the march from Oleandry up to the Battle of Kościuchnówka. The Polish Legions were a Polish military force established in August 1914 in Galicia soon after WWI erupted between the opposing alliances of the Triple Entente on one side and the Central Powers on the other side, including the German Empire and Austria-Hungary.

"Legions will be classical war cinema displayed on a major scale with the use of the most modern film techniques. We plan to showcase the most beautiful and dramatic moments of the legion story, including the famous cavalry charge during the Battle of Rokitna, which will be one of the most spectacular sequences of the film", producer Maciej Pawlicki told FNE.

Maciej Pawlicki is producing through Picaresque in coproduction with FINA, with a planned budget of 6.5 m EUR / 28 m PLN. The film already received financial support from the Polish Ministry of Culture and National Heritage. The initiator of the project is Adam Borowski, who is also a coproducer of the film.

Shooting launched on 1 August 2017 and will wrap by the end of September 2017. The premiere is planned for October 2018.

Dariusz Gajewski was highly praised for his award winning dramas Warsaw (TVP) and Strange Sky (Tak Film). He is also the vice president of the Polish Filmmakers Association.

Picaresque
www.picaresque.pl
This email address is being protected from spambots. You need JavaScript enabled to view it.

FINA
http://www.fina.gov.pl/
This email address is being protected from spambots. You need JavaScript enabled to view it.