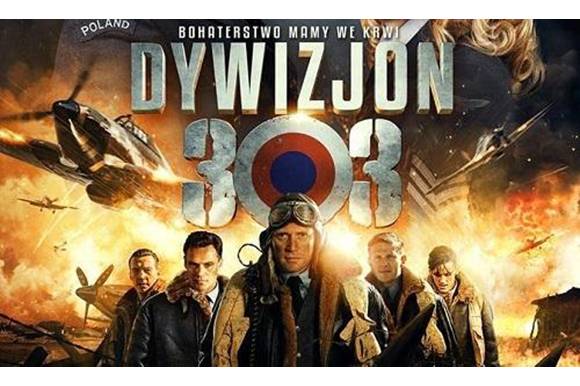 WARSAW: The Polish/British WWII drama about Polish fighter pilots, 303 Squadron directed by Denis Delić, opened in 16th place, and was the second strongest foreign film in the UK and Ireland, taking in 120,000 GBP during the opening weekend.

The film was broadly presented at special screenings in Europe and has been sold for distribution to Japan, Spain and the Ukraine, with more territories to come.

"The official UK premiere took place on 8 November 2018 in London, where we were proud to be accompanied by WWII veterans and their families. We hosted special screenings of the Polish and English language version of the film in Germany, Austria, Belgium, Holland, Luxembourg, Denmark, Sweden, Iceland, USA, Canada, and the title was sold into regular distribution to Korea, Japan, the Ukraine and Spain. We are also negotiating several other territories," Sławomir Ciok from production company Film Media told FNE.

303 Squadron, inspired by Arkady Fiedler's bestselling historical novel of the same title, follows the story of Polish pilots in Britain during WWII and the famous 303 Squadron. It is an epic film based on documents and memories of the legendary pilots, shot in both Polish and English, with a Polish-British cast that includes Piotr Adamczyk, Maciej Zakościelny, Cara Theobold, Anna Prus, Andrew Woodall, John Kay Steel and Kirk Barker.

Squadron 303 was produced by Jacek Samojłowicz and his company Film Media in coproduction with Luma Ventures, Studio Orka and Lightcraft Advertising. The film was released in Poland by Mówi Serwis on 31 August 2018 and has had 1,399,467 admissions to date.