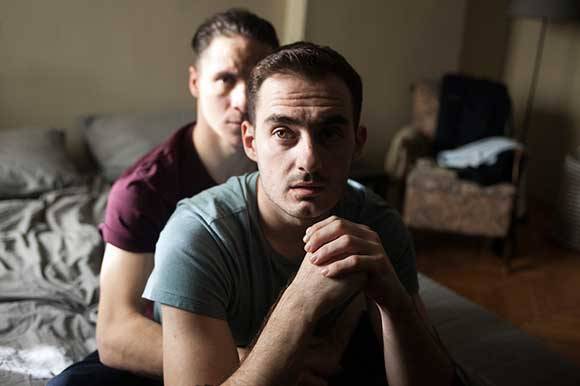 COTTBUS: Poppy Field, presented in connecting cottbus’ Works in Progress section on 7 November 2019, confronts the still-prevalent topic of homophobia in Romania in a tight 24-hour story of a Romanian policeman coming to terms with his sexual identity.

Poppy Field is the debut film of Romanian theatre director Eugen Jebeleanu. The story, written by Ioana Moraru, begins when the policeman’s French boyfriend arrives for a visit. Their rendez-vous is interrupted by his sister, who suspects her brother is going through a “gay phase.” Later that day, he is called to break up a homophobic protest at a theatre, where one of gay cinema-goers recognises him from a past encounter. In real life, ultra-religious protesters stopped a screening of Ivana Mladenovic’s Soldiers. A Story from Ferentari in 2018.

The script was penned by newcomer Ioana Moraru. The DoP is the acclaimed Romanian cinematographer Marius Panduru. The film previously had the working title Inside / Înăuntru.

The film is shot in French and English and produced by Velvet Moraru and Andrei Luca Icon Productions on a budget of 932,000 EUR. The film is supported by the Romanian Film Centre, Publicis Groupe Media Bucharest, Media Investment Communication, Cinema City and the MEDIA Programme – Creative Europe and has all of its funding in place. The producers were in Cottbus seeking sales agents and distributors, and told FNE that most of their one-on-one meetings at connecting cottbus were with Western European companies.

Producer:
ICON production
This email address is being protected from spambots. You need JavaScript enabled to view it.