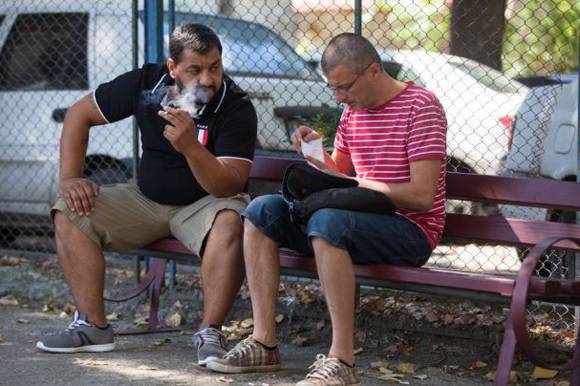 Soldiers. A Story from Ferentari by Ivana Mladenovic

KOSICE: The first feature film by Ivana Mladenovic, Soldiers. A Story from Ferentari, is competing for the Blue Angel award at the 26th Art Film Fest, running through 23 June 2018 in Kosice, located in southeastern Slovakia.

This contemporary gay love story set in the poorest neighborhood of Bucharest had its world premiere at the 2017 San Sebastian FF and it was also selected for Toronto Festival’s Discovery section.

The film follows Adi, an anthropologist who moves to the Ferentari neighborhood to work on his PhD thesis on manele music and who starts a relationship with Alberto, a Roma ex-convict with an addiction for gambling.

The film was produced by Ada Solomon through Romania’s HiFilm Productions in coproduction with Jelena Mitrovic through Serbia’s Film House Bas Celik and Cassandre Warnauts and Jean Yves Roubin through Belgium’s FRAKAS Productions.

German sales agent Beta Cinema is handling the sales. Micro Film released the film in Romania on 2 February 2018. It has had over 7,100 admissions domestically.

The Serbian director Ivana Mladenovic studied film directing at the National University of Theatre and Film "I.L. Caragiale" in Bucharest. She made her debut as an actress in Radu Jude’s drama Scarred Hearts / Inimi cicatrizate (HiFilm Productions).

HiFilm Productions
This email address is being protected from spambots. You need JavaScript enabled to view it.
www.hifilm.ro

Film House Baš Čelik
http://bascelik.net
Jelena Mitrović - Producer
This email address is being protected from spambots. You need JavaScript enabled to view it.