FNE at Slovenian Film Festival Portorož: Let Him Be a Basketball Player Featured 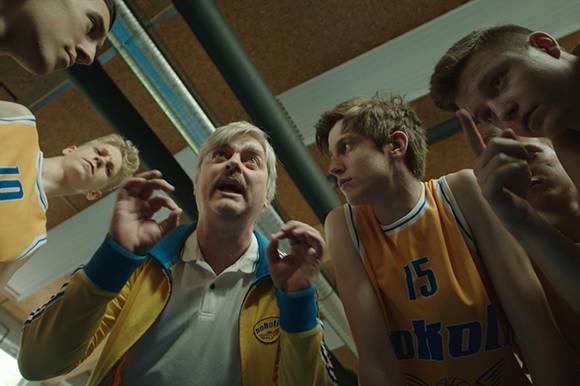 Let Him Be a Basketball Player by Boris Petkovič

LJUBLJANA: The youth comedy Let Him Be a Basketball Player / Košarkar naj bo by Boris Petkovič will be screened in the competition of the 20th Slovenian Film Festival in Portorož (12-16 September 2017). The film is crafted after the well-known book by Primož Suhadolčan, who also penned the screenplay.

Let Him Be a Basketball Player is a story about Ranta, a very tall teenage boy attending primary school. When the gym teacher notices his talent for basketball, Ranta’s world turns upside down. He becomes the most popular boy in school and he experiences his first love.

The main role is played by the newcomer Klemen Kostrevc alongside the young talents Matija Brodnik (Come Along, 2016, A.A.C. Productions) and Gaja Filač.

The film was produced by Frenk Celarc through Gustav Film in coproduction with RTV Slovenija, MB Grip, Studio Ritem, Unicasting and Pecl. The project was supported by the Slovenian Film Center, FS Viba and through the Media support for the development of individual projects.

The total budget is 817,000 EUR. “RTV Slovenija has been the major source of financing with the amount of 450,000 EUR, while the Slovenian Film Center contributed 123,700 EUR”, producer Frenk Celarc told FNE.

The film will be released in Slovenian cinemas by Fivia on 14 September 2017.

Gustav film
www.gustavfilm.si
This email address is being protected from spambots. You need JavaScript enabled to view it.

RTV Slovenija
http://www.rtvslo.si/
This email address is being protected from spambots. You need JavaScript enabled to view it.

MB Grip
http://jelnikar.si/
This email address is being protected from spambots. You need JavaScript enabled to view it.