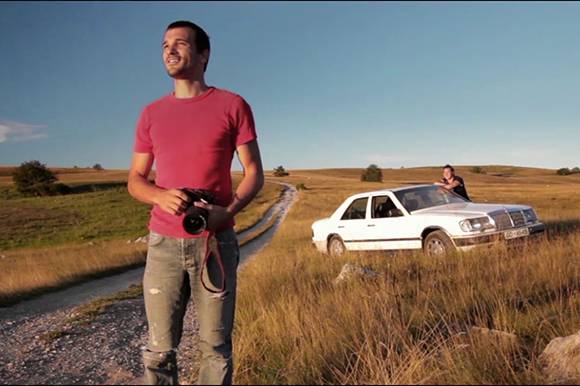 PORTOROŽ: Ksana by Dejan Babosek will be screened in the competition of the 20th Slovenian Film Festival in Portorož (12-16 September 2017). Babosek’s second feature film is the story of two brothers who want to regain their lost childhood connection.

David, an actor, and his half brother Roman, a construction worker, meet again when their father dies. Remembering the trips their father used to take them on, they want to rebuild the lost brother-to-brother relationship and decide to make a trip to the same places. But their journey soon turns into a trip full of rivalry, envy and resentment.

“The spring 2011 was coming to an end. We had time, energy, some money and an enormous creativity drive. At a spontaneous meeting with Jan Bučar, discussing some other project, the idea for Ksana had been born. After that everything happened very fast,” Babosek told FNE about the development of the project.

The main roles are played by Jan Bučar (TV series Usodno vino, Pro Plus, 2014-2017) and Primož Vrhovec (Case Osterberg directed by Matej Nahtigal and produced by Lignit Film, 2015). The film was shot on location during 15 days in the summer of 2011.

The cinema release is scheduled for October 2017 in Ljubljana’s Kino Bežigrad, but no distributor is attached yet.

Narayan production
www.narayanproduction.com
This email address is being protected from spambots. You need JavaScript enabled to view it.

Snaut
www.snaut.si
This email address is being protected from spambots. You need JavaScript enabled to view it.

Art BC
This email address is being protected from spambots. You need JavaScript enabled to view it.