FNE at Festival of Slovenian Film in Portorož 2018: My Last Year as a Loser Featured 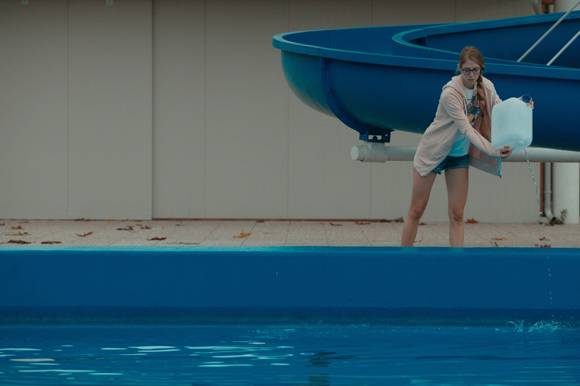 Eva Jesenovec as Špela in My Last Year as a Loser by Urša Menart Copyright: Željko Stevanić

PORTOROŽ: Urša Menart's debut feature My Last Year as a Loser / Ne bom več luzerka will be screened in the competition of the 21st Festival of Slovenian Film in Portorož (10-15 September 2018). The story is focused on a 29-year-old unemployed girl, who can’t seem to find her footing after the end of Slovenia’s long economic crisis.

Špela graduated in Art History and has never had a steady job. Unlike her two best friends, who moved out of Slovenia years ago with no plans to return, she is determined to stay in Ljubljana. When even her longtime boyfriend gets a job abroad, she moves back in with her parents and her grandma. But Špela still wants to grow up.

“My Last Year as a Loser is a drama/comedy about disillusionment, experienced by my generation after having a hard time finding a place for ourselves in modern Slovenian society. I also wanted to explore the gap between the overeducated, underemployed millennials and their parents, who had high expectations for their kids and feel powerless when watching them fail,” director Urša Menart told FNE..

The main role is played by Eva Jesenovec, joined by Jurij Drevenšek, who got the Vesna Award for Best Supporting Actor for Tomaž Gorkič's horror drama Idyll (2015, Blade Production).

The film was produced by Danijel Hočevar through Vertigo in coproduction with NuFrame, 100 and RTV Slovenia. The project was supported by the Slovenian Film Center with 320,000 EUR, while Studio Viba Film provided technical support in the amount of 147,271 EUR. The total budget was 644,069 EUR. “Vertigo contributes 51,366 EUR, RTV Slovenia 100,000 EUR, NuFrame 14,625 EUR and 100 contributes 10,807 EUR,” producer Danijel Hočevar told FNE.

The 27 shooting days took place in Ljubljana in September-October 2017. The film will be domestically released at the beginning of 2019.

Urša Menart was born in Ljubljana in 1985. She graduated in Film and TV Directing at the AGRFT.

Vertigo
www.vertigo.si
This email address is being protected from spambots. You need JavaScript enabled to view it.

NuFrame
www.nuframe.si
This email address is being protected from spambots. You need JavaScript enabled to view it.

RTV Slovenia
www.rtvslo.si
This email address is being protected from spambots. You need JavaScript enabled to view it.