FNE at Festival of Slovenian Film in Portorož 2018: I Act, I Am Featured 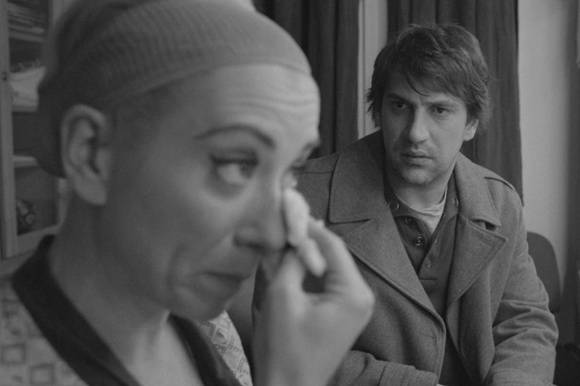 Goran Bogdan in I Act, I Am by Miroslav Mandić

PORTOROŽ: Miroslav Mandić’s black and white drama I Act, I Am / Igram, sem will be screened in the competition of the 21st Festival of Slovenian Film in Portorož (10-15 September 2018). This three-part story explores the interaction between the roles that actors and actresses play on stage or in front of the camera, and their impact on their private lives. The film is a Slovenian/Bosnian/Croatian coproduction.

While preparing to play a thief, a young actress begins stealing in real life. During his research for the part of a bum, a theatre actor wanders around shelters trying to make friends with the homeless. This freedom overwhelms him. An actor and an actress play a passionate couple in a TV soap. After the production is over he pursues her, claiming to be in love.

“This triptych is conceived in a way that stories feed off of each other, the impact of one main character complimenting the other two. Character studies explore social issues of a particular environment while preserving the main idea - in each story an actor pursues the quest that their emotions demand", director and screenwriter Miroslav Mandić told FNE.

I Act, I Am was produced by Miroslav Mandić and Nina Robnik through Slovenia’s Filmostovje and Amra Bakšić Čamo through Bosnian SCCA/pro.ba in coproduction with Aatalanta, Zvokarna, Nuframe and Croatian Antitalent. The total budget is 268,204 EUR. The project was supported by the Slovenian Film Center with 150,000 EUR.

The film was shot in March-April 2015 and also in February 2017 in Bosnia and Herzegovina (Sarajevo), in Croatia (Zagreb, island of Krk) in September-December 2016, and in Slovenia (Ljubljana) in March-April 2016. The domestic release is set for January 2019.

Miroslav Mandić was born in 1959 in Sarajevo, where he studied Comparative Literature. He graduated from the Columbia University in the City of New York with an MFA in Screenwriting/Directing. After a short film career in Bosnia and Herzegovina, the war prompted him to migrate to the Czech Republic. He is currently based in Slovenia.

I Act, I Am is his fifth feature film.

Filmostovje
www.filmostovje.com/
This email address is being protected from spambots. You need JavaScript enabled to view it.

SCCA/pro.ba
http://pro.ba/en
This email address is being protected from spambots. You need JavaScript enabled to view it.

Nuframe
http://nuframe.si/
Žiga Pokorn: This email address is being protected from spambots. You need JavaScript enabled to view it.

Antitalent
www.antitalent.hr/
This email address is being protected from spambots. You need JavaScript enabled to view it.