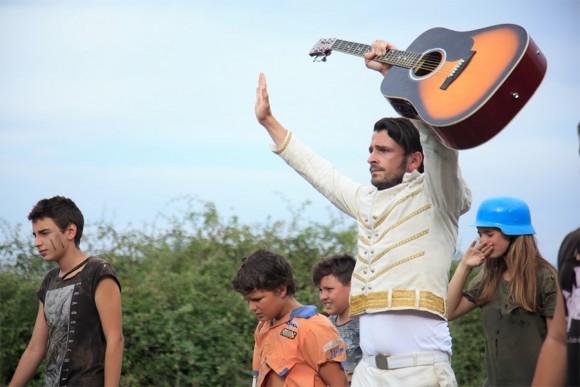 Prolific production outfit, Film and Music Entertainment led by Mike Downey and Sam Taylor have joined forces with Albania’s Kkoci Productions on Elvis Walks Home, based on an original screenplay by Welsh author Jonathan Preece and directed by Fatmir Koci.

This is the second collaboration of Preece, Koci and Mike Downey of Film and Music Entertainment , the first being the well-received Amsterdam Express which was the first ever UK-Albania co-production.  Shooting wrapped on September 26th in Tirana.  World sales on the film are currently open.

The film tells the story of Mickey, an illegal Albanian who used to live in London and is a part time Elvis Presley impersonator. He gets a job entertaining British peacekeeping troops in the 1999 Balkans wars. When backstage problems ensue, Mickey (dressed as Elvis Presley) flees - straight into the war zone. He meets and is captured by a group of children refugees caught up in the merciless war. To save his skin he lies and tells them he is a United Nations doctor. The kids put a gun to his head and tell Mickey to take them to the UN refugee camp or they’ll shoot him. When they reach the camp, it is marooned between the warring factions. To stop the fighting Mickey puts on his guitar and sings as Elvis as he walks onto the battlefield. It works: but Mickey is now himself, not Elvis. He buries the white jumpsuit and begins to walk home, but in fact he has no home.

The original screenplay was developed with the proceeds of the UK National Lottery through the Arts Council of Wales as well as with cash from Creative Europe’s Media programme. The production received funding from the Albanian Film Centre. The film will also benefit from the tax credit as well as with key private equity funding from the UK and Albania. SAER MEDICAL from Tirana joined the production as a 10% minor co-producer.

Elvis Walks Home was shot in the mountains of Central Albania and in the South at an old ex-military base.

Koci’s latest film Pit Stop Mafia also starring Kastrati, has just opened in Tirana in May 2016, and his previous films include Amsterdam Express, The Time of The Comet and Tirana Year Zero.  Downey and Koci have been working together for a number of years having met in the nineties when Koci attended the Imaginary Academy in Croatia, where Downey gave production masterclasses.

Film and Music Entertainment have been having a busy summer with a number of productions both completing and entering production.

Antonio Saura’s Latido have also just come on board to handle international sales for Rajko Grlic’s eagerly awaited  The Constitution, which just picked up the Grand Prix des Ameriques at the recent Montreal Film Festival.

Downey and Taylor are currently looking to complete finance on are How To Sell a War by Rudolph Herzog.  Written by up and coming Welsh screenwriter/playwright, Tim Price, the film is developed  by Creative England and is a black comedy in the spirit of Thank You for Smoking and Wag the Dog.

Also in the latter stages of financing are The Disciple directed by Koza helmer Ivan Ostrochovsky and written by Rebecca Lenckiewicz and Ostrochovsky  and Konstantin Bojanov’s  My Eyes Are Yours (working title) which is a partnership with Urban Distribution, and India’s Overdose.

Also in post is Helsinki Film’s Tom of Finland by Dome Karukoski.  Protagonist Pictures has come on board to handle worldwide sales on Dome Karukoski’s biopic about the life of the iconic Finnish artist and human rights activist. Aleksi Bardy wrote the screenplay for the film which tells the life story of Touko Laaksonen, a Finnish man who would become known around the world by his nom de guerre “Tom Of Finland”.

Continuing their fruitful relationship with Poland, F&ME have come on board  Bodo Kox’s award winning screenplay The Man With The Magic Box produced by Iza Igel at Alter Ego productions.  The company is also in an advanced stage of negotiation with Polish partners to join Andrzej Jakimowski’s new production Once Upon a Time in November

Currently in post-production for the company in Berlin is Light Thereafter by AVE writer director Konstantin Bojanov.  The film, a road movie about a young artist’s journey to meet his hero, stars 71’s  Barry Keoghan, Kim (Pusher) Bodnia and Thure Lindhardt (Angels and Demons).  A co-production between UK (F&ME) , Bulgaria (Multfilm), Belgium (Leftfield) the film is being sold internationally by Antonio Saura’s Latido Film Sales the film will be completed in time for Sundance and Berlin.

Also just delivered is Rade Serbedzija and Danilo Serbedzija’s co-directing effort, The Liberation of Skopje (Osloboduvanje na Skopje) made in partnership with Igor Nola in Zagreb, Robert Naskov, Medo Tozija and Vladimir Anastasov in Skopje, Arto Halonen in Finland and F&ME in the UK.

Tweet
More in this category: « AMERICAN FILMMAKERS IN SEARCH OF POLISH LOCATIONS 15 Shorts Nominated for the European Film Awards 2016 »
back to top