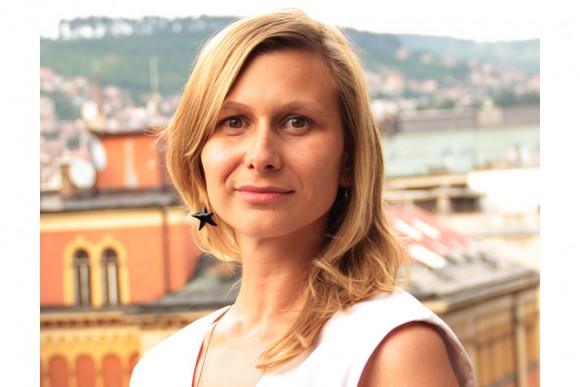 Elma Tataragić, the General Secretary of the Bosnian Filmmakers Association

SARAJEVO: FNE spoke with Elma Tataragić, the General Secretary of the Bosnian Filmmakers Association about the challenges the association is facing as a key institution in the development of the Bosnian cinema and in the absence of a film centre, and about the changes that the new Film Law will bring.

FNE: When was the Association of Filmmakers of Bosnia and Herzegovina established?

Elma Tataragić: In 1950. Many many years ago. Most of the professional associations here are young and fresh, but this one is 65 years old. Of course, now it's a lot different than it used to be. It was first an organisation gathering freelance filmmakers but little by little it has changed, and it has changed dramatically over the past 20 years not only in terms of the members but also in terms of what the association is doing.

Basically because of the fact that we don't have a film centre, we decided not to make the cinema suffer and we set up various programmes in a way to promote the cinema including our annual catalogue where we put all the information about the films which were produced over the year, the BH Film Programme in association with Sarajevo Film Festival where we show Bosnian films, make special focusese, target certain filmmakers, tackle certain film funds which are supposed to come and see these films in order to make them travel.

Also our activites are quite visible in Berlin and Cannes, and we are also the association deciding the national film for the foreign-language film Oscar nominations. We also have an annual professional award called Ivica Matić. Also we have a website dedicated to the Bosnian cinema. So it's a lot of work.

FNE: How many members does the association have?

Elma Tataragić: We have 108 members. Basically most of them are involved in filmmaking, but also we have a few casting agents, festival organizers, film critics, and we are considering expanding this towards actors as well in 2016. We were hoping that the actors would make their own association but since that has not happening, we decided to welcome them all the more since we became the Bosnian representative for the European Film Promotion in 2015, which means that we will be suggesting actors for the Shooting Stars programme in Berlin.

FNE: Are you working together with other professional associations from abroad?

Elma Tataragić: Basically with the European Film Promotion, but we are also keen on promoting films and collaborating with film festivals. We had several retrospectives of Bosnian cinema lately. The biggest one was in Indonesia in 2014 where we showed about 30 Bosnian contemporary films in four cities. We are also collaborating with the film festival Les Arcs as a part of the ex-Yugoslavia project and now we are preparing a retrospective of the Bosnian short films for Sardinia, Italy in December 2015.

FNE: Are you involved in the elaboration of the new Cinema Law which is currently under discussion in Bosnia and Herzegovina's Parliament?

Elma Tataragić: Yes. We are always involved. We have tried to be involved in all the strategic legislation matters related to cinema. We have two of our members in this five-member committee with the Ministry of Culture. Basically, we had three professionals if we include Jovan Marjanović, who is our member but who was part of the committee as the head of the Film Fund.

We are now waiting for this law to pass and we hope that it will absolutely change the situation of the Bosnian cinema especially the funding.

FNE: So a Bosnian Audiovisual Centre should be founded based on this new law.

Elma Tataragić: We are expecting this to happen. The Association is doing a lot, but we are an NGO, not a funded governmental institution and we are doing it because we are professionals who really don't want our cinema to die. Each of us has his own work to do and all we do is really out of enthusiasm. We are filling the gap until everything is set up.

FNE: What is the main challenge for the Bosnian film industry?

Elma Tataragić: The main challenge is definitely the funding. The system that we have now is not really able to support the film production. Only in half of the country we have a film fund and the budget for this film fund is a little bit less than 1 m EUR and it’s decreasing every year, and 1 m EUR is for all these festivals, for all the short documentaries or fiction films is definitely not enough. The other entity (Republic of Srpska) is in and even worse situation. They have set up an official call for proposals for projects only recently.

So the law is very precise in how the funding will function and how it can work in obtaining more money for the cinema because the cinema is not wasting money, it is also bringing a lot of money back. As most of the feature films made here are coproductions, we did a little math: if a film gets about 100,000 EUR from our Film Fund, it will bring five times more to the city, including the local employees, hotels, food, services etc. So the state has to be aware of that and in order to make them aware we needed a strategy and to say: "We are not begging you for money, we are asking you to give us money so we can give you back much more."

So funding is the main issue. We are very much connected to other producers and festivals from abroad, we have a good platform for promotion and in that sense we are in a very good condition. But the funding cannot go on like this. We just received the money for 2014 and it is already over mid 2015. You cannot work like that on long term.

FNE: How is your relationship with the Ministry of Culture and Sports?

Elma Tataragić: It really depends on who is the Minister of Culture. It’s sort of became a matter of personal relationships which is also quite bad because it doesn't give you space for making a long term strategy. He or she is there for three or four years and then leaves, but we have projects which need 10 or 20 years to set up and to give some results.

What we have managed is to convince the Ministry of Culture to put professionals on the Film Fund board. This is a big step forward, that for the past four years we have people involved in the cinema on the film board. So now we have, together with them, changed the rules, they have set up the rules of procedures and criteria, and this is really becoming something else.

FNE: How quick do you think the Bosnian film industry will develop?

Elma Tataragić: I am an optimist, I think in five years the industry will be backed which means that there will be, I hope, three times the money which we have now, which will definitely increase the production of feature films, and it will also decentralize the entire film production.

Now it is very much focused in Sarajevo, but I think that this new legislation will open up space for dispersing to other film centers such as in Herzegovina, which has a strong documentary film festival that made them aware of documentary filmmaking. There is also Banja Luka with a new generation of filmmakers coming up.

There is a lot of potential. If you look at the locations in Bosnia and Herzegovina, it's an amazingly beautiful country. Tax incentives could be the new step which could also change the way the film production is developing. But that is a second step.