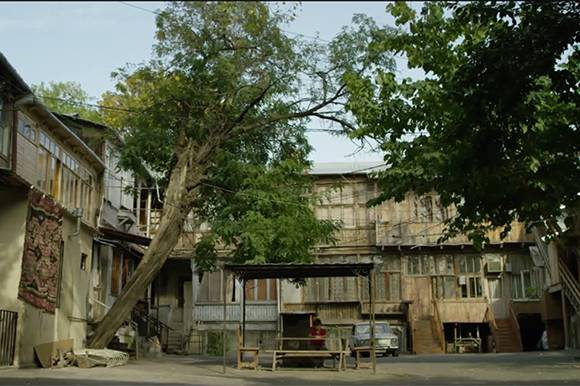 TBILISI: Gigisha Abashidze is in postproduction with his debut feature Neighbors, set for release in autumn 2017. The film is the first Georgian/Macedonian coproduction.

In the old courtyard, where families have lived together for generations, an investor comes to buy their nearly ruined houses and build a skyscraper. Only one owner, Gia, goes against the deal as he works hard to redecorate his part of the house.

This project, which has won three best project awards, is produced by Lasha Khalvashi through Studio Artizm in coproduction with Georgia’s Gemini and Svetozar Ristovski through Macedonia’s Small Moves Films. It is supported by the Georgian National Film Center, the Macedonian Film Agency and Eurimages.

The film was shot in October through December 2016. Tornike Gogrichiani, Ia Sukhitashvili and George Bochorishvili are starring.

The budget is 500,000 EUR, Lasha Khalvashi told FNE. As Khalvashi will soon participate in 2017 Cannes Producers on the Move, he would like to find postproduction partners or film funds, as well as sales and festivals. No local distributor is attached yet.

Studio Artizm
This email address is being protected from spambots. You need JavaScript enabled to view it.
www.artizm.studio

Gemini
This email address is being protected from spambots. You need JavaScript enabled to view it.

Small Moves Films
http://www.smallmovesfilms.com/
This email address is being protected from spambots. You need JavaScript enabled to view it.