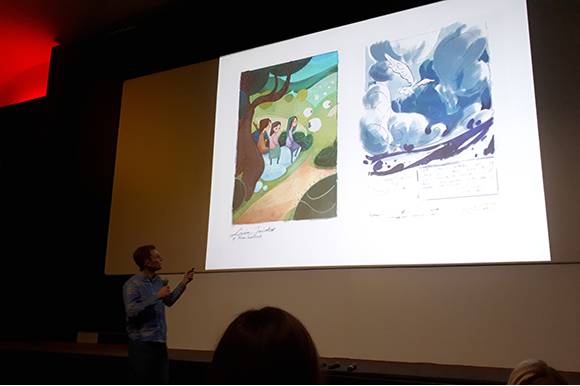 Screenings of Works in Progress took place on 20 October 2017. The four projects presented to Polish and international film professionals include drama, animation and a documentary.

The full list of works in progress presented during Warsaw Industry Days 2017:

Ewa Bukowska’s drama 53 Wars is a story about Anna and Witek, a young married couple, who are very much in love. He is a war correspondent, who spends most of the year at the heart of raging conflicts. She spends her days waiting for him to come home. She tries to lead a normal life, but her fears turn out to be stronger than faith. She begins preparing herself for the worst...

“This is a true story. The film was inspired by a book by Grażyna Jagielska. Grażyna Jagielska and Wojciech Jagielski, they live in Poland and their story has a happy ending”, director Ewa Bukowska told FNE.

The film is produced by Jacek Bromski and coproduced by Canal +, The Chimney Pot, Wojciech Kabarowski Digital Movies. 53 Wars is the sixth debut from Munk Studio – Polish Filmmakers Assosiation. The project is supported by the Polish Film Institute. The cast includes accomplished Polish actors such as Magdalena Popławska and Michał Żurawski. The film is in postproduction and is set to be ready by the end of November 2017.

The producers are looking for a sales agent and festivals.

Production contact:
Michalina Fabijańska, Munk Studio
+48 604 474 254
This email address is being protected from spambots. You need JavaScript enabled to view it.

The new project of directors Klara Kochańska and Kasper Bajon is a story about a young middle-class married couple that sets out on a journey to Southern Europe, which turns out not to be a nice camping trip. The couple is heading towards refugee camps on the Macedonian-Greek border. They don’t talk much about their destination or their marital problems, to which they have been turning a blind eye for a long time. However, they soon find themselves confronted with the socio-political situation of today’s Europe, as well as their own personal issues.

“When we thought about this movie, we thought that we can’t  tell the story of refugees , because being a refugee is not our experience, but we thought about our experience, about  how we are looking at the problem of insensitivity in the modern society. It is important because in Poland we have many  people who came here during late 60s and 70s, were studying here. During the communism they could not provide their own culture, so we decided to make a film about a man, who came to Poland in 60s-70s  and  we also decided not to take our salaries, because we thought  that it is somehow not moral to take money from a movie, which talks about it”, the director Kasper Bojan told FNE.

The producers are looking for a sales agent and distribution.

Production contact:
Dagmara Piasecka, MD4
+48 502 326 206
This email address is being protected from spambots. You need JavaScript enabled to view it.

Ethiopiques – Revolt Of The Soul (Poland)

The new documentary from director Maciek Bochniak tells the story of the beautiful and swingy seventies in Ethiopia. The main characters, despite their dreams, will have to choose between survival under a murderous regime and exile. Their love for music will connect them on three different continents to continue the fight to preserve a unique musical treasure.

“ All of these artists were a huge inspiration for artists we know like Andy Costello, or even filmmakers, for example Jim Jammers”, the representative of Pokromski Studio Igor Lesage told FNE

The feature is produced by Mikołaj Pokromski (Pokromski Studio), Izabela Łopuch, Hanka Kastelicova (HBO) in coproduction with Marie Noëlle (P’artisan Filmproduktion GmbH). The project is now is postproduction . The premiere of the documentary is set for 20 November 2017.

The producers are looking for local distribution and also coproduction.

Production contact:
Igor Lesage, Pokromski Studio
+48 505 171 865
This email address is being protected from spambots. You need JavaScript enabled to view it.

The new animation feature from director Bartek Kik tells the story about Madalena, who discovers her mother’s secret journal. Using the directions from the journal, Madalena sets out on an adventurous journey through her hometown of Fatima. She is accompanied by her brother and their two new friends, whose identities remain unknown to her. During the expedition, Madalena learns the true meaning of friendship, loyalty, faith and betrayal. The secret that is finally revealed changes her life and the lives of those close to her.

“We found it very interesting, that it also has a religion background. Since Poland is a Catholic country, there are 1,3 billion of Catholics in the word, so we thought, that telling a nice story of Madalena will be an interesting project.”, the producer Wojciech Stuchlik told FNE.

Fatima is produced by Piotr Sikora through Platige Image in coproduction with Portugal’s  Imaginew. The scriptwriter of Fatima is Philip Lazebnik (known for Pocahontas, Mulan from Disney and The Prince of Egypt from Dreamworks). The project is in development now.

The producers are looking for a sales agent.

Production contact:
Wojciech Stuchlik, Platige
+48 607 722 152
This email address is being protected from spambots. You need JavaScript enabled to view it.

The Warsaw Industry Days is co-financed by the Polish Film Institute with the financial contribution of the Warsaw Film Foundation.