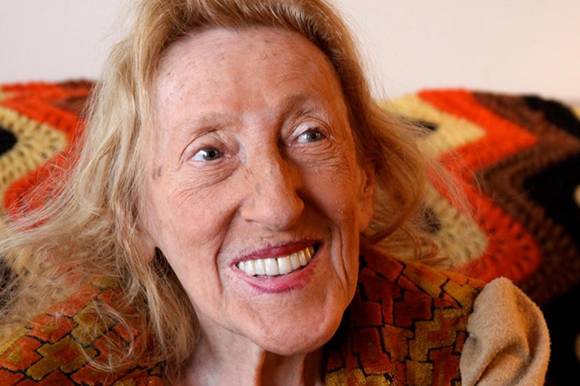 The Distance Between Me and Me by Mona Nicoară and Dana Bunescu, photo: Nina Cassian

BUCHAREST: Mona Nicoară and Dana Bunescu are in the final stages of postproduction with The Distance Between Me and Me, a documentary about the Romanian poet Nina Cassian (1924-2014). The film, produced by Ada Solomon among others, is a Romanian/U.S. coproduction set for release in 2018.

For nine decades, the poet, musician and visual artist Nina Cassian walked a tightrope between a rebellious private life marked by creative play, obsessive love and an obstinate faith in communist ideals, and the public experience of fascism, Stalinism and an ironically redemptive American capitalism.

An intensely personal film about history, art, the individual and love, The Distance Between Me and Me / Distanța dintre mine și mine tells the history of Communism as seen by this Jewish artist, whose refuge in the underground Communist Party in the 1930s put her on a collision course with Nicolae Ceaușescu, sending her into a late, unwanted New York exile in 1985, when her subversive poems led to the murder of a friend by the Secret Police.

Anchored structurally on intimate, vérité-inflicted conversations with the sharply critical and viciously funny poet in her New York home, the film lucidly explores the tension between official and personal archives and recovers a complex, visually striking and surprising past.

The film, shot during the last year of Cassian’s life, is based on an idea by Ada Solomon and is produced by Romania’s Hi Film Productions and Sat Mic Film from the U.S., in coproduction with Romanian Public Television (TVR) and with the support of the Romanian Film Centre and the Creative Europe - MEDIA Programme of the European Union. Ada Solomon, Mona Nicoară, Diana Păroiu and Alexandru Solomon are the producers.

Sales agents and distributors are welcome.

Romanian-born U.S.-based Nicoară previously made the awarded documentary Our School (2011) together with Miruna Coca-Cozma.

Hi Film Productions
www.hifilm.ro
This email address is being protected from spambots. You need JavaScript enabled to view it.