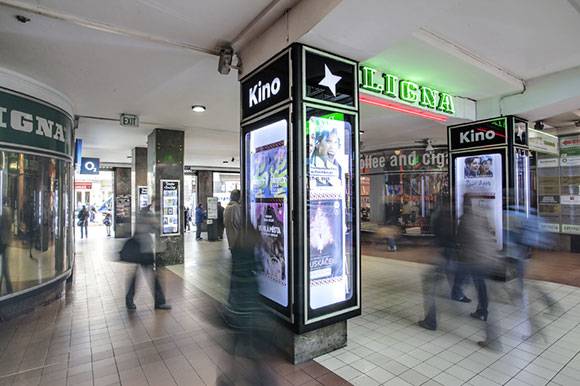 This month we speak with Petr Jirásek, the manager, statutory representative and shareholder of Světozor, one of the most adventurous cinemas in Prague. Opened in 2004 and renovated in 2007, Světozor is now an art house cinema functioning on the site of a cinema dating back to 1918.

Světozvor has a large screening hall with 365 seats, a small screening hall with 54 seats, a bar and a café. The cinema runs not only art films, but also documentaries and also minor and experimental genres such as animation, video art, net art, commercials, video-clips and short films.

Petr Jirásek, born in 1976, has managed Světozor since 2004 and is also a shareholder of the distribution company Aerofilms s.r.o. A graduate in accounting and finance at the University of Economics in Prague, he previously worked at the Ministry of Finance of the Czech Republic.

Petr Jirásek: That there is no time for the “big” challenges, because of the busy day-to-day schedule. Making sure everything works, dealing with hundreds of small tasks and permanent communication with our audience is the biggest challenge that we experience every day, again and again. When we manage to find a moment, we dedicate it to the strategic development of our cinema.

Petr Jirásek: The largest part of our programme is the European art production. We don’t see ourselves as the antithesis to the saturated multiplex environment, our goal is to bring quality European (and non-European) cinema to its audiences. Without an art house cinema like ours, a large part of the audience would have to rely on illegal downloads or, in better cases, on VOD. Cinema is also a place to meet. Nothing compares to a shared viewing experience, not even the largest television in your living room.

Petr Jirásek: Festivals, like their audiences, change during the years, even though the most faithful group of supporters usually stays. It would be a terrible mistake to loose these audiences. We see them as an important part of our identity. What better place is there to screen European, Iranian or Bollywood movies, where else should people, who are willing to travel many kilometres just to see a specific movie in a cinema, meet.

Festivals also bring a unique atmosphere to the cinema. Sitting in a screening hall full of people and seeing their reactions after a festival jingle is one of the most satisfying feelings there is.

Petr Jirásek: Things cannot work without a partnership and a mutual dialogue. Actually, they can, but not as well as they do now. It might sound like a cliché, but being a part of a something as large as the Europa Cinemas community carries a great importance. Seeing the jingle before every screening shows us how many cinemas from all around the world are our partners and we remember that we experience the same things as many people from all around the world. Being able to talk to them about it at various conferences, workshops and seminars is very enriching.

Petr Jirásek: Given our location in the very centre of the Czech Republic’s capital city, where only tourists and people working in the nearby shops and office buildings come on a regular basis, it is quite complicated for us to create a real local community. We have gradually become a cinema where people come to see art films, so our community is, quite logically, based on cinema lovers.

Petr Jirásek: We have been around for a long time, people know us and they like to visit us. Our long-term goal is to keep this position, at least. It is of equal importance to us to speak to people on social networks as well as hear their opinions directly in the cinema. In order to attract the audience, we use all the standard communication channels with a primal focus on online.

Petr Jirásek: We don’t consider digitalisation as a topic of public discussion anymore. We consider it a standard and the rule unfortunately usually is, that who didn’t digitalise, doesn’t exist anymore.