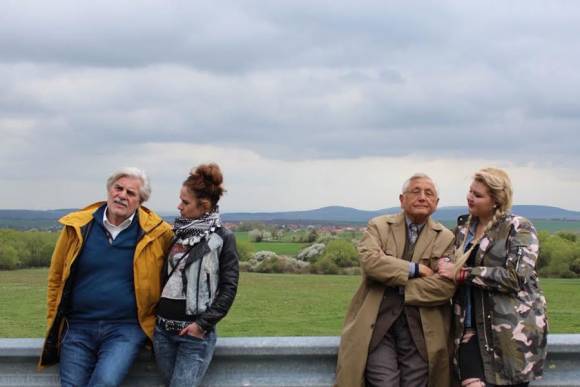 The Interpreter by Martin Sulik

Šulík penned the script with Marek Leščák, with whom he cooperated on Gypsy and The Garden / Záhrada from 1995. The film depicts the story of two elderly men, who accidentally discover similarities between their families’ tragic issues during WW II. The Slovak Jew Ali and the former teacher Georg decide to travel across the country to find witnesses of the past and deal with their own struggles.

The film is the director’s response to the increasing tendencies of fascism spreading across Europe. “One layer of the film is the detective-like search of the main characters following the clues leading towards a former Austrian SS officer who worked in Slovakia during WW II and circumstances around mass murder. Those dynamic motives are accented by the second layer, which shows two old men with totally different conceptions of life,” Šulík said.

The poetic road movie was shot in various locations across Slovakia, including Bratislava, Banská Bystrica, Žilina, Ružomberok and the small towns of Ľubietová and Bešeňová.

The cast also includes the winner of the 2018 national Sun in a Net award for best actress Zuzana Mauréry and Attila Mokos. The crew is comprised of Šulík's close collaborators including DoP Martin Štrba, who recently worked on A Prominent Patient / Masaryk (produced by In Film, Rudolf Biermann and coproduced by the Czech Television, RTVS).

The film had an estimated budget of 1.5 m EUR. It earned just under 100,000 EUR in its Slovak release across four weeks and in its opening weekend in Czech release in spring 2018.

Šulík's company Titanic produced the film together with Rudolf Biermann´s In Film. Coproduction partners are Austrian coop99, Slovak RTVS and Czech Television. It was supported by the Slovak Audiovisual Fund and the Czech State Cinematography Fund. Distributor Garfield Film, which is handling the sales, is planning to release The Interpreter in spring 2018.

Titanic
This email address is being protected from spambots. You need JavaScript enabled to view it.

In Film
http://www.infilm.cz/en/
This email address is being protected from spambots. You need JavaScript enabled to view it.

Coop99
http://www.coop99.at/
This email address is being protected from spambots. You need JavaScript enabled to view it.

RTVS
www.rtvs.sk
This email address is being protected from spambots. You need JavaScript enabled to view it.

http://www.ceskatelevize.cz/english/
This email address is being protected from spambots. You need JavaScript enabled to view it.