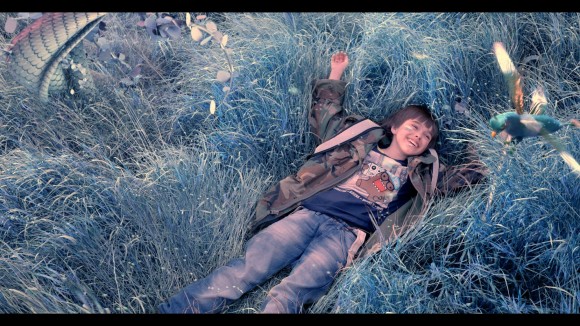 “Behind The Blue Door” (original title: ‘Za niebieskimi drzwiami') a record-breaker at the box office! It's the most successful Polish movie for young viewers co-financed by the Polish Film Institute. Over 215 thousand viewers!
Film record at IMDB: http://www.imdb.com/title/tt6233882/?ref_=nv_sr_1

Directed by Mariusz Palej, “Behind The Blue Door” is the first choice for young people when it comes to Polish films. So far it's drawn the audience of more than 215 thousand. This captivating adaptation of the Polish bestseller was not only appreciated by children and their parents, but also by critics and jurors of international festivals. “Behind The Blue Door” bewitched the jury of the 34. ALE KINO! International Young Audience Film Festival, who awarded it the ALE KINO! DEBUT prize for the best debut. The movie was also recognized with an honorary distinction by the SKSiL (The chains of art houses and local movie-theatres) “for a brilliant debut in the challenging category of live action movies for young viewers” at the Międzynarodowy Festiwal Filmów Dla Najmłodszych „W chmurach” (International Film Festival for Children “In the clouds”). Part of the profits from the box office sales goes to “Akogo?”, the Ewa Błaszczyk Foundation.

“Behind The Blue Door” is a film that you can see at the cinema with your whole family, class or school. You will laugh, cry and feel a little scared – all of which will lead to long conversations about love” - says director Mariusz Palej.
“This is a movie about the life-giving power of love. It is worth seeing on the big screen, because this is a unique family experience. I wanted to make a movie which was nothing like what's been done before. I managed to cross the Rubicon, successfully establishing a modern era communication with the kids. We never dreamed of such critical acclaim or the recognition from the jurors of various festivals as well as our viewers. They have our deepest gratitude.”

Film “Behind The Blue Door” takes the viewers on an incredible journey. It has everything children love – interesting characters, mysterious monsters and new friends – magical colourful birds. It tells a story of what happens, when you close your eyes and fall asleep… Through the magical door you enter a dream world. So real that you can take residence there, so exciting that you want to explore it and so mysterious, that it will scare you. This is the first movie in the Polish cinema of such calibre and special effects, bound to be loved by the whole family. It shows how precious the power of parental love can be.

The film was produced by TFP in cooperation with: Telewizja Polsat, FremantleMedia Polska, Heliograf, Alien FX, AB Film Production, Dreamsound and Odra-Film. It was co-financed by PISF. Main cast: Ewa Błaszczyk, Dominik Kowalczyk, Michał Żebrowski, Magdalena Nieć, Teresa Lipowska and Adam Ferency. By watching this film you support The “Akogo?” Foundation of Ewa Błaszczyk. To that end, the movie is also held under the honorary patronage of the First Lady of the Republic of Poland, Agata Kornhauser-Duda.

“Behind The Blue Door’ is a display of Mariusz Palej's visual imagination. A display which must have required a lot of struggle from the director, searching for ways to good-naturedly deceive the viewer…"

“Mariusz Palej's Behind The Blue Door is unique for two reasons. Firstly, somebody finally took it upon himself to elevate the Polish family movie genre to the modern standards of the global market. Secondly, this achievement of the Polish cinema is no sugar-coated fairy tale about holiday adventures, but very surreal fantasy, combining a fairy tale with horror".

“I'm trying to recall a film for children and young people, which moved me and impressed me as much as  Behind The Blue Door. And… it takes me all the way back to the eighties, when as a little girl with flushed cheeks, but also a pillow ready to cover my eyes, I watched 'E.T.' and the “Never Ending Story” (…) The world behind a blue door enchants with its brilliance, but hides a dark secret. While uncovering it Łukasz brings that danger into the real world. And this is where the lines between the fairy tale and reality start to blur, while the action gains momentum”.

“Behind The Blue Door: a visually daring horror for young viewers. The first movie of this kind in Poland”.

“An absolutely spectacular fantasy picture, full of irresistible magic (…) Behind The Blue Door is a daring Polish undertaking showing that we are capable of making a decent fantasy cinema with a quite clever plot and visually pleasing special effects”.

“The film directed by Mariusz Palej, on the one hand is a faithful adaptation of the novel, and on the other its creators conjured up an original, since non-existent world, not only from the Szczygielski's descriptions but also from their own artistic sensitivity and imagination. In the big screen version of Behind The Blue Door – like in any film adaptation – there are bigger and smaller shortcuts, changes to the plot and the characterisation of the heroes, but I wouldn't say that the film is worse than the book. The book is indeed very good (…), and the film is not its one-to-one reflection. In some respects it doesn't rival the original, while in others it definitely makes up for it or even surpasses the book”.

“Behind The Blue Door – a film, that won over the critics, drawing enthusiastic reviews, delighted the young audience as well. Last weekend over 25 thousand viewers saw it, which means that a story about what happens behind a blue door dethroned Andrzej Maleszka's ‘Magiczne Drzewo’ (The Magic Tree) at its opening”.

“Behind The Blue Door will move and scare the viewers. There is a deficit of such movies for the young audience in the Polish cinema – self-aware, with subtle message and ending. You should watch the film with your kid (…) You will have plenty to talk about afterwards”.

“Director Mariusz Palej freely draws from pop culture tropes from Hitchcock's ‘The Birds’ to one of the best American series in recent memory – ‘Stranger Things’. And rightly so, because it facilitates communication with the young viewers, while at the same time providing entertainment for their parents, who will have to answer several important questions once they leave the movie theatre”.

“Behind The Blue Door wins the viewers over not only through its visual panache, but mostly with the way it constructs its main hero. He isn't one of the kids populating the family genre, but a representative of young Poles AD 2016”.

“Mariusz Palej in his debut Behind The Blue Door put Polish filmmakers to shame. Without a multimillion budget he made a wise (and terrifying) family movie about a journey to the subconscious, which rather seems to draw from Has and Schulz”.

Tweet
More in this category: « WEMW: 22 projects selected for the Trieste co-production forum The European Audiovisual Observatory celebrates its 25th anniversary this year with a new look and a new Presidency – Poland! »
back to top