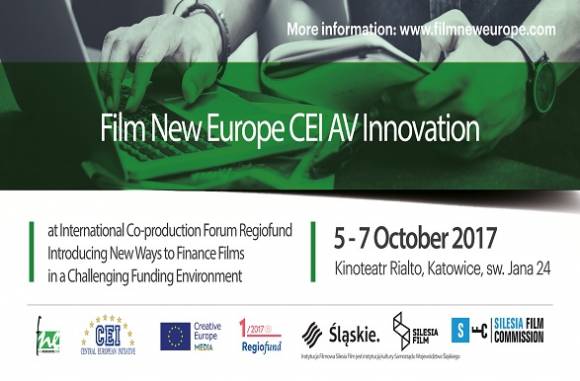 The FNE CEI Innovation Days, organised in partnership by Film New Europe the number one networking platform for film professionals in Central and Eastern Europe and the Baltics, and the International Co-production Forum Regiofund presented a two day format of panels, case studies and industry networking to explore how innovation and technologies are impactingthe  audiovisual industry in the region and Europe at large.

The panel discussions and case studies day held on October 5th at the cinema “Rialto” featured two panels and two case studies ranging from an overview of Polish immersive content ecosystem, analysis of Slovenian blockbuster At Hostar, new developments in Ukrainian co-production structure, and similarities and differences between content and technology investments in Europe.

At session one, “Taking Poland immersive. Exploring new trends in virtual reality and 360 video storytelling & production”, producer Marcin Łunkiewicz of  Zielony Pomidor Studios / Mimoo, who pioneered the first successful 360 degree video series in Poland, outlined the difficulties of inventing a new cinematic language and monetisation opportunities for filmmakers who wish to cross over to virtual reality productions. “The market will be growing together with technology, and we need more local high quality content and that is currently missing”, Łunkiewicz commented in explaining plans to launch a network of regional VR cinemas. Producer Maria Pułaska-Białkowska from HRZ3D Studios which focuses on high quality 3D animation and visualisation seconded that the regional industry is still on its way to appreciate the potential of animated content, although new markets are opening in real estate and commercial visualisation.

Session 2, “How to make a million? Case study of Slovenian web series that became the national blockbuster At Hostar”  explored the success of Slovenian surprise blockbuster At Hostar, originally a series of comedy driven Youtube video sketches which were developed into a record breaking feature. Director Luka Marčetić and producer Goran Hrvačanin attributed the unexpected success of the ultra-low budget yet record breaking film to two criteria - knowing and cultivating fan audiences through digital platforms such as Youtube and Facebook, and the increasing need of local audiences for domestic commercial content, often overlooked by national financiers.

At Session 3, Renowned producer Andrey Yermak, with Karlovy Vary premiered Slovak Ukrainian coproduction The Line, which was the Slovak submission of the Oscars, explained new trends and opportunities in co-producing with Ukraine. With increased budgets, and expanded eligibility for television productions, Ukraine is set to become an attractive destination for both indie and major productions.

The last session, “Where’s the money and what’s the interest?  Mapping public and venture capital financing for film and co-productions” explored the similarities and differences between the structure and expectations between film and the currently booming startup sector in Europe. Acclaimed French producer Ilann Girard (March of the Penguins, Lebanon) presented the Online Film Financing platform (OLFFI) that incorporates the historically fragmented public financing landscape by providing a one stop online shop  access to more than 750 public funds. Ian Collins, serial entrepreneur and managing partner at UK’s Radium Services, highlighted that whilst venture capital money is available it comes with high costs. Ian Collins from UK’s Radium Services – a business development agency in the tech/digital space - highlighted that whilst venture capital money is available it comes with high demands. “Both in US and Europe the trend amongst technology investors is to expect a minimum return of three times the invested capital and a solid IRR of 20%+”, Collins remarked. He said that the film sector might learn from the technology industry by focusing on clear metrics, building the business case by evidencing existing or past data points to de-risk the investment and make it make attractive to investors - such as the profile/personas of the target audience, the marketing strategy and routes to market, the pricing models and how much they are willing to pay for it.

The second day, October 6th of the Film New Europe CEI AV Innovation Days focused on networking between the attending experts and participants with the calls for frequent meet ups and discussions on new platforms and regional monetisation possibilities during 2018.

The programme of the FNE CEI AV Innovation Days was curated by Sten-Kristian Saluveer, the former Head of Industry at Tallinn’s Black Nights Film Festival, and the founder of Storytek Accelerator - a unique business development accelerator that helps audiovisual creatives, producers and early stage companies to develop business, fast track their content, products and services to the global markets and access finance.

The International Co-production Forum Regiofund was created out of the success of numerous industry events organised for seven previous editions of the International Festival of Film Producers Regiofun.

By changing from the film festival formula to an event for industry professionals the Forum aims to become a platform of co-operation within the film industry, and all of its potential partners and investors.

The Central European Initiative (CEI)  is a regional intergovernmental forum committed to supporting European integration through cooperation among its Member States. It combines multilateral diplomacy and project management, both as donor and recipient, while bridging European macro-regions.

The Film New Europe is the largest and most important networking platform for film professionals in Central and Eastern Europe and the Baltics.  The FNE Daily newswire is the voice of the region with a focus on cultural diversity and promoting the visibility of the region’s AV industry globally.  FNE has the only dedicated AV INNOVATION team and provides a platform for sharing models that can cross borders and attract audiences.

Contact: Sten-Kristian Saluveer
Curator
This email address is being protected from spambots. You need JavaScript enabled to view it.

Last modified on 2017-10-27
Tweet
More in this category: « MIDPOINT Feature Launch 2017 – Final workshop about to begin TWO WEEKS LEFT TO APPLY TO THE WEMW CO-PRODUCTION FORUM »
back to top