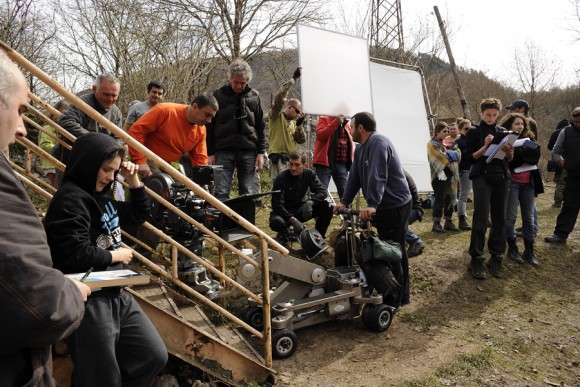 TBILISI: Acclaimed director, producer and screenwriter George Ovashvili has just finished the shooting of his feature film Khibula, a Georgian/German/French coproduction about the first president of Georgia, Zviad Gamsakhurdia, in the final chapter of his life.

The name of Gamsakhurdia is never mentioned in the film, as the film is conceived as a generalisation of the history of a leader, his rise and his fall.

Elected in 1991, Zviad Gamsakhurdia was soon forced into exile by a coup d’etat, and although he returned, political clashes forced him into exile again. The film follows him into the Georgian mountains, accompanied and pursued by both friends and foes. The circumstances of his death are still unclear.

Roelof Jan Minneboo and Ovashvili wrote the script. Enrico Lucidi (Baarìa) is the DoP. The names of the cast have not been released. Ovashvili is producing together with Nino Devdariani through their company Alamdary Films in coproduction with Germany’s 42 Film and France’s Arizona Productions.

The budget is 1,525,011 EUR, representatives of Alamdary Films told FNE. The project participated in l’Atelier du Festival de Cannes 2011 and also in the Co-production Lab Locarno 2013.

The shooting spanned across 46 days in March and April 2016. The film is expected to be finished in November 2016. The date of the premiere is not known yet.