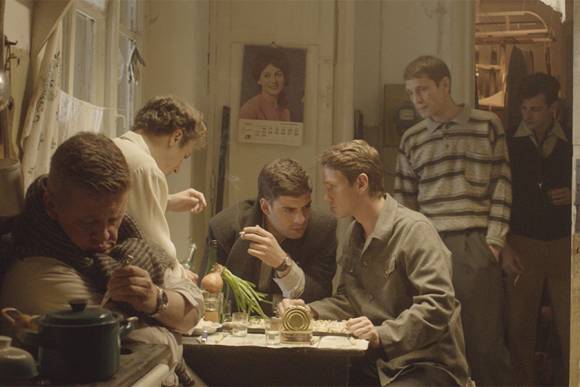 BERLIN: Russian director Alexei German Jr has scored a slot in the main competition with the Russian, Polish, Serbian coproduction Dovlatov about six days in the life of the brilliantly ironic Russian Jewish writer Sergei Dovlatov who eventually left the Soviet Union for the USA when his writings were not possible to publish in the USSR.

German captures the atmosphere of Leningrad in November 1971 with a perfect feel for the mood of the city where the action takes place. The city is shrouded in fog and another anniversary of the revolution is being celebrated, but the country is deep in the stagnation of the Brezhnev era and nothing is happening politically, economically or culturally.

Dovlatov played brilliantly by Serbian actor Milan Marić has his manuscripts are regularly rejected by the official media. His sharp and ironic view of life in the USSR is not on the agenda for the Soviet authorities. But he refuses to conform. Other writers are experiencing similar problems, including his friend Joseph Brodsky played by Artur Beschastny who is eventually forced into exile.

But Dovlatov is determined to stay and lead a normal life with his wife Lena played by Helena Sujecka and daughter Katya played by Eva Gerr. He wants to write about the  reality the Leningrad around him.  For example the construction of the metro where one day the bodies of thirty children killed during the Second World War are uncovered.  This moves him deeply.

The story is partly narrated by Dovlatov who is unable to get into the Writers’ Guild due to his non-conformist ideas and therefore barred from publication in serious literary journals.  He makes a living working for a factory workers journal but even there he gets into trouble when he writes ironically about a celebration of the anniversary of the Great Russian Revolution where people are dressed as literary giants who praise the new order.

German is known for his visual style as much as for his scripts and characters and he works together for the first time here with Lukasz Zal the extraordinarily talented DoP  who lensed of Pawel Pawlikowski’s Ida.  Together they bring us a dreamlike vision of 1970s Leningrad making use of German’s trademark grand tableaux and extended tracking shots.

Some will find echoes of German’s Under Electric Clouds in the film’s visuals.  But Dovlatov is more conventional in its concept and for that reason probably more accessible.  Under Electric Clouds split both critics and audiences into love it or hate it camps.  Dovlatov is more likely to suffer from the simple fact that Sergei Dovlatov while he emigrated to New York eight years after the action in the film takes place is simply not very well known outside Russia.  His greatest claim to fame internationally is that he was a friend and contemporary of the much better known Joseph Brodsky who also emigrated.

Nonetheless German paints a brilliant tragicomic picture of the literary world of 1970s Leningrad that will keep his fans happy and may bring both German and Dovlatov some new ones.