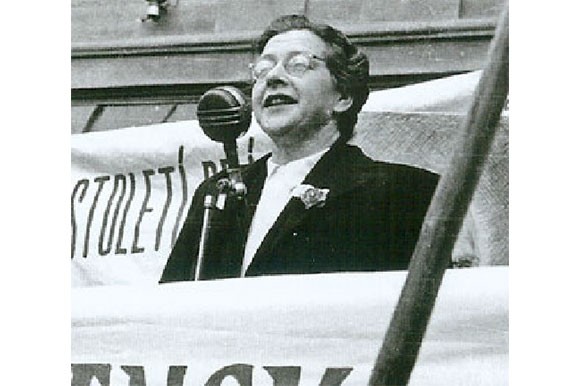 PRAGUE: After nine years of preparations and financing, US based Czech director, screenwriter and producer David Mrnka started shooting his new film titled Milada about Milada Horakova on 5 November 2016.

Milada Horakova was a lawyer, politician and human rights campaigner, who became a symbol of anti-authoritarian resistance in Czechoslovakia during the Communist Regime. In 1950, Horakova became the first woman executed by the Communist Government on charges of conspiracy and treason, for her actions in promoting democracy and assisting those being persecuted by the autocratic government. She became an international icon for human rights and democracy.

The shooting will take place mainly in Prague, Terezin, where the Nazis established a ghetto and an internment camp during WWII, the Šumava mountains and around Hradec Kralove. Horakova's daughter Jana Kanska provided the filmmakers with unpublished materials including private letters, family photos and Horakova's husband´s memoires.

Milada will be shot as a feature film although it contains exact quotations from Horakova's last letters, her speech before the court, President Klement Gottwald's speech during the Communist coup in 1948 and other documentary material, said Mrnka, who studied film direction and production in Australia and worked as producer for the CNN International in 2013-2014.

Israeli actress Ayelet Zurer is cast in the main role and US actor Robert Gant will play Horakova's husband Bohuslav. Czech actors will appear in other roles, including Anna Geislerova as Ludmila Brozova, an infamous young communist prosecutor. The film will be shot in English and subsequently dubbed in Czech.

The crew includes high profile Czech names: Martin Štrba as DoP, Milan Býček as the production designer and Simona Rybáková as costume designer. The release is planned for fall 2017. The world rights for streaming were acquired by Netflix.

The film is supported by the State Cinematography Fund´s production incentives.

Loaded Vision Entertainment
Email: This email address is being protected from spambots. You need JavaScript enabled to view it.
http://loadedvision.com