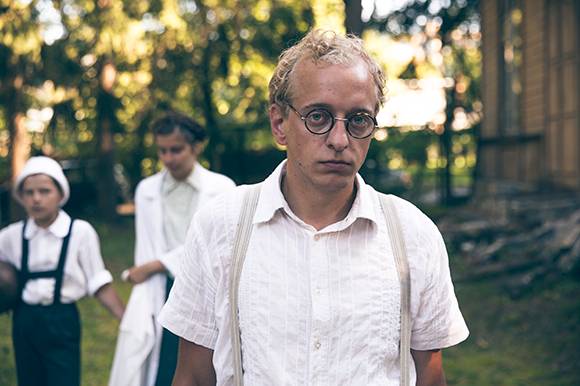 The Purple Fog by Raimundas Banionis

VILNIUS: Acclaimed film, theatre and TV director Raimundas Banionis is returning to film directing after 25 years with The Purple Fog / Purpurinis rūkas. This historical drama is currently in production with theatrical release set for 2018.

The story takes place in post-war Lithuania and is both genuine and painful, as it presents a personal point of view on the poignant themes of guilt and remorse. Having eluded the destiny of his parents to be gunned down, Josef, the main character, has to make a choice – to blame or to forgive. Which will he choose? For whom will he give his voice, when the offence is so great and the reverse of fortune so severe?

Arūnas Stoškus and Kęstutis Petrulis are producing through Lithuania’s Studija 2 in collaboration with the Lithuanian National Radio and Television (LRT). The budget is 800,000 EUR. The Lithuanian Film Centre is supporting.

Principal photography started on 8 August and after a short break will continue until 30 November 2017.

Raimundas Banionis graduated from the All-Union State Institute of Cinematography in Moscow in 1980. He received his first prize for his graduation project, the feature film Speed Is My God / Greitis mano dievas, and began working as a director/producer at the Lithuanian Film Studio (a company that produced all his films made before 1992). He released My Little Wife / Mano mažytė žmona in 1985 and the TV series Sixteen Year Olds / Šešiolikmečiai (with Šarunas Bartas in the lead) in 1986.

I Don’t Remember Your Face /  Neatmenu tavo veido (1988) depicted the conflict with the prevailing system. In 1990, The Children from the Hotel America /  Vaikai iš “Amerikos” viešbučio marked the beginning of independent Lithuanian cinema, while Jazz / Džiazas (1992) showed the complex relationships between young people in the Soviet era.

Studija 2
This email address is being protected from spambots. You need JavaScript enabled to view it.