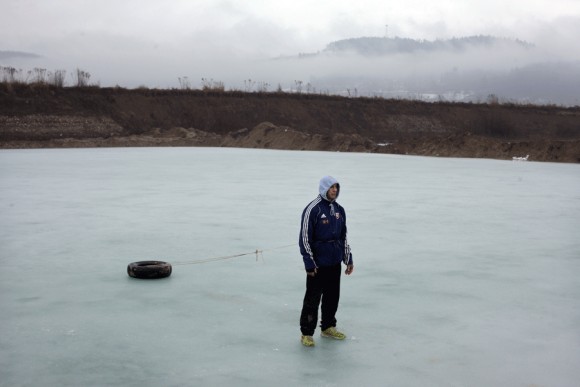 One of the biggest success stories of 2015 was the Weinstein production, Marco Polo 2, which became the first production to benefit from the new Slovak tax incentive scheme.

One of the biggest international productions to shoot in Europe this year, Marco Polo 2, spent nine shooting days in Slovakia with a crew of 550 filmmakers of which 120 were Slovak crew members and spent 2m EUR in Slovakia. Until now Slovakia has lagged behind its neighbours Hungary and the Czech Republic which have had tax incentive schemes for a number of years but now that looks set to change.

Since 2010 when it started distributing production grants, the Slovak Audiovisual Fund re-shaped the position of Slovak films on both the domestic and international market. Twenty domestic full-length films (including documentaries) premiered in Slovakia through November 2015 compared to 23 in 2014.The fund receives approximately 500 applications per year and has supported up to 50% of applicants annually.

Martin Šmatlák, the director of the AVF, said: “Slovak film is visible now. It is at international festivals, in cinemas, on VOD platforms and it’s covered in the press and on TV. We have a new generation of filmmakers and film producers, people who graduated from film schools a few years ago and who make international coproductions. We also have various genres of domestic films.”

After the 2014 box office hit, the documentary 38 (Noemo) by Lukáš Zednikovič and Daniel Dang, another successful Slovak documentary was released in 2015. Rytmus, the Urban Dream / Rytmus, sídliskový, the first film by Miro Drobný (also the producer of the film), was in at number seven in terms of the admissions for the top ten films of the year through November 2015. The film was produced by Európsky Institut in coproduction with Romeofilms and eSlovensko.

Filmtopia is a Bratislava-based distribution company launched in 2012. After releasing titles like Mátyás Prikler`s Fine, Thanks (MPhilms), it began distributing domestic films on the web portal DAFilms. In 2014 Filmtopia launched a crowd funding campaign for mobile cinema distribution in Southern Slovakia, and in 2015 it brought Brazilian cinema into theatrical distribution, thus gaining the Cinema do Brasil Distribution Award.

Filmtopia is also the Slovak partner for KineDok, the international community for alternative distribution of creative documentaries supported by Media – Creative Europe and AVF.

The first official day-and-date release was the portmanteau film Slovensko 2.0 produced by MPhilms and distributed by Film Europe Media Company in 2014. As for VOD platforms, there is little Slovak participation, although a lot of documentaries can be found on DAFilms. A new platform for Slovak films, Kinocola, was launched in 2014.

Slovakia is well-placed in the move towards digitization thanks largely to the foresight of the Slovak Audiovisual Fund, which has been allocating a portion of its annual budget towards the transformation of non-multiplex cinemas. By the fall of 2014 Slovakia had 123 cinemas with 197 screens of which 139 screens in 67 cinemas and three summer cinemas were already digitized.

The AVF provides a combination of grants and loans for the digitalisation process, giving 50% in grants and 40% in loans, with 10% required from the cinema itself. Small cinemas, such as film clubs and cultural centers, can receive up to 90 percent of their costs for a lesser upgrade (E-Cinema), to a maximum of 15,000 EUR.

AVF supported the digitization of Slovak cinemas with 559,300 EUR in 2014 and 218,000 EUR in 2015 through the programme Developement of the audiovisual technologies in Slovak Republik.

Several small art house cinemas operate in Bratislava. Kino Lumiere Cinema, operated by the Slovak Film Institute opened in September 2011 in the site of the former Charlie’s Centrum. Foaje (with 30 seats is the smallest cinema in Slovakia), Mladost and Nostalgia also add to the diversity of Bratislava art house landscape.

Film Europe entered the exhibition scene in 2013 opening Kino Film Europe in the site of the former Lenin Museum in Bratislava, in partnership with the City of Bratislava. The cinema’s programme consists of events-driven art house fare. Film Europe also works with numerous small cinemas in rural areas and small towns that were digitized as lower-cost e-cinemas, by offering its catalogue of films on Blu-ray.

The fund, which stated that support of European coproductions was one of the its priorities, gave grants to seven minority coproductions in 2015.

Under the minority coproduction scheme a film can receive a maximum of 500,000 EUR, with 80% required spend in Slovakia. The Czech Republic is Slovakia’s main coproduction partner, accounting for 80% or more of all coproductions, followed by Poland, Hungary and Germany.

The primary source of information on film is the Slovak Film Institute, which celebrated its 50th anniversary in 2013, and its National Cinematographic Centre through the specialised office of the Audiovisual Information Centre.

Foreign film production has been nearly non-existent for the past two years. Bratislava once boasted the newest and best-equipped film studio in Central and Eastern Europe, Koliba Studios, but it was later converted into a TV studio and offices, and is now expected to be transformed into a housing complex. The introduction of film incentives in early 2014 and plans for the construction of a film studio near the Austrian and Hungarian borders could be a hopeful sign for the future of the foreign film service industry.

A new programme of support for the audiovisual industry in the Slovak Republic has been launched in 2015, based on a 20% cash rebate for private investment into film production in Slovakia with a minimum limit of 2m EUR over a period of three years after the registration of the project, which could be a film, a TV series, or a group of projects.

The Slovak Audiovisual Fund issued the first registration certificate for a cash rebate of 20% for the Weinstein Company’s TV series Marco Polo Season 2. The Slovak company applying for registration is the local production service company Spectral. The expected amount of qualifying expenditure is 2.2m EUR.

A new funding scheme of the Bratislava Self-Governing Region has been launched in 2015 for supporting the culture of the region. Film is one of nine cultural fields supported by this scheme.

Slovakia is unique in the CEE as the home of the only channel in the region devoted exclusively to European films, Film Europe Channel developed by the media company Film Europe. It broadcasts in Slovakia and the Czech Republic and is considering expansion into neighbouring territories. The channel operates in Slovakia along with public broadcaster RTVS and commercial broadcasters:  MAC TV with channels: TV JOJ, PLUS, WAU, JOJ Cinema, RiK, and MARKIZA – SLOVAKIA with channels: TV Markíza, TV Doma, Dajto.

Public broadcaster, RTVS, is also a funding source for film production and has, together with other sources, contributed to the productivity of the national cinema lately. Out of a total of 195 films 81 were coproduced by RTVS in1990-2014.

Fax: +421 5923 4461
This email address is being protected from spambots. You need JavaScript enabled to view it.
www.avf.sk

Radio and Television of Slovakia
Mlynská dolina
845 45 Bratislava
+421 2 6061 1103
This email address is being protected from spambots. You need JavaScript enabled to view it.
www.rtvs.sk