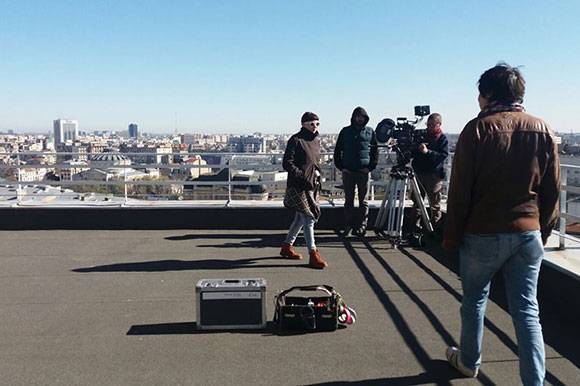 "With Two Lottery Tickets I didn't plan a crowd-pleaser or a film for festivals. I wanted a kind of easy-going film that I would like to see on a Saturday evening. Its unexpected success in cinemas was mostly due to the favourable auspices of its distribution, and I honestly believe that its success was also due to its unpretentiousness. I want something similar with Never Let It Go," Negoescu told FNE.

He also said that he doesn't expect it to be as successful as his previous film, however this one is more on his taste. Negoescu wrote the script about Petru, a math teacher who is discussing his love problems with his close friends, a writer and an actor. When Petru's girlfriend gets pregnant, he has to deal make choices that will change the path of his life.

The main character is played by Alexandru Papadopol, who starred in and was one of the producers of Two Lottery Tickets. Radu Romaniuc and Rolando Matsangos play Petru's best friends.

Negoescu is producing through Papillon Film & N-Graphix in coproduction with Poli Angelova through Bulgaria's Screening Emotions. Radu Stancu from deFilm is delegate producer.

Shooting takes place on location in Bucharest and will wrap mid-May 2017. The premiere is set for the end of 2018. No sales agent or distributor are attached to the project yet.

Papillon Film & N-Graphix
This email address is being protected from spambots. You need JavaScript enabled to view it.

Screening Emotions
http://www.screeningemotions.com/
This email address is being protected from spambots. You need JavaScript enabled to view it.