FNE at Art Film Fest 2019: By a Sharp Knife Featured 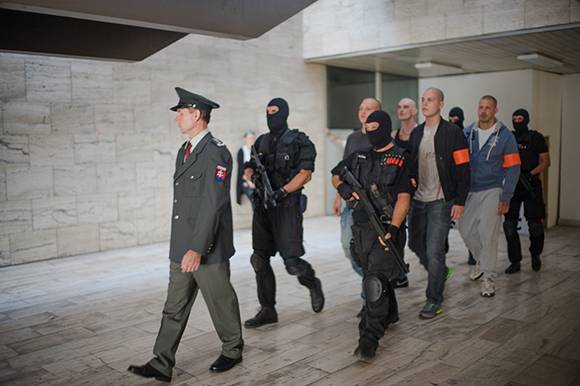 By a Sharp Knife by Teodor Kuhn photo: Šimon Lupták

KOSICE: The debut film by Teodor Kuhn, By a Sharp Knife / Ostrým nožom is screening in the Slovak Season of Art Film Festival, which runs through 22 June 2019 in the East Slovak city of Kosice.

The political drama is freely inspired by real events and the well-known case of the murder of young student Daniel Tupý by neo-Nazis in 2005, which has never been properly solved. The film follows in the footsteps of political thriller and box office hit Kidnapping / Únos (JMB Film & TV Production in coproduction with RTVS and Štúdio 727) by Mariana Čengel Solčanská. By a Sharp Knife follows the trend of political topics and sharp criticism of judicial failures from modern Slovak history.

Penned by feature debutants Jakub Medvecký and Teodor Kuhn, the film tracks the story of Ľudovít, who lost his son to a ruthless neo-Nazi attack. Because of a loophole in the Slovak legislation, the attackers are soon released and Ľudovít is faced with absurd injustice. He struggles with the apathetic police force, the opportunistic judge and with the fact that he was never close with his own son. When he learns that the attack was not an accidental neo-Nazi incident, but involved an organised crime gang, he realises that he is facing an enemy beyond his powers.

„By a Sharp Knife aims to open this painful wound, one of the most immense in the history of modern Slovakia. We used this specific case as a baseline, because accidental tragic attacks will always occur – but a disfunctional system that prevents their punishment is a much more complicated problem,“ the director said.

The main roles are played by renowned Slovak actors Roman Luknár, Ela Lehotská and Jana Oľhová and Czech actor Miroslav Krobot. The film was shot in 30 days in Bratislava. The dramaturgy of the project was supervised by Czech scriptwriter Štěpan Hulík, who is most noted for his cooperation with Agnieszka Holland.

By a Sharp Knife is a coproduction between Slovak nutprodukcia, Madness Productions, RTVS and Czech nutprodukce in cooperation with Home Media Production. The budget of 500,000 EUR was supported by the Slovak Audiovisual Fund, the Slovak Literary Fund and the Czech Cinematography Fund.

Kuhn directed two shorts that have screened at festivals, Momo and I am sorry, both produced by the Film and Television Faculty of the Academy of Perfmoming Arts in Bratislava, where he finished his PhD studies in 2015.

The film is represented by the international sales company WIDE. It is distributed in Slovakia by Continental Film. It was awarded best film in the New Europe competition section of the 26th Prague International Film Festival.

Producer:
nutprodukcia (Slovakia)
This email address is being protected from spambots. You need JavaScript enabled to view it.