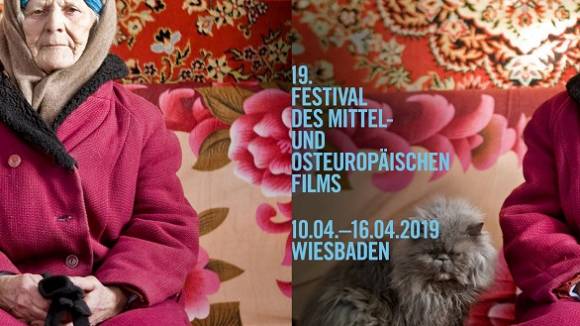 goEast – Festival of Central and Eastern European Film will be welcoming a host of high-calibre guests for its 19th edition: in addition to Krzysztof Zanussi, the subject of this year’s Homage, multi-award-winning director Sergei Loznitsa will also be paying a visit to Wiesbaden, where he will be giving audience members special insight into his experiences in a master class open to the general public. Croatian actor Leon Lučev is slated to be on hand at the festival to present his directorial debut. Furthermore, filmmaker Helke Misselwitz is paying a visit to Wiesbaden.

The Specials section once again promises a variety of events, including the traditional Matinee, where actor Kida Khodr Ramadan will be presenting KANUN (Germany, 2018), his first outing as a director, the Schools goEast programme and the finest genre films from Central and Eastern Europe, selected this year in co- operation with the Fantastic Zagreb Film Festival. Finally, the exhibition “Eastern Fairy Tales”, featuring the work of photographer Frank Herfort, provides unfamiliar glimpses into life in the post-Soviet republics.

The annual master class, open to the general public for the first time this year, will be given by Sergei Loznitsa. The Ukrainian director and screenwriter gained notoriety starting in the mid 1990s for his documentary films treating Soviet history. His most recent film THE TRIAL (PROTSESS, Netherlands, 2018) also takes up this subject and will be featured in the goEast programme. Aside from his documentary work, Loznitsa is also a prolific director of fiction features whose films have been honoured in Cannes, among other places.

Leon Lučev is an established star in front of the camera, not only in his native Croatia, but in all of the former Yugoslav republics as well. At goEast, Lučev will be presenting his first effort behind the camera, the short film I CAN BARELY REMEMBER THE DAY (MALO SE SJEĆAM TOG DANA, Croatia, 2018). This film, which revolves around a man who is confronted with the death of his father on his daughter’s birthday, will be shown as an entry in the RheinMain Short Film Competition.

In addition, director Helke Misselwitz will be making an appearance in Wiesbaden. Misselwitz began her career in the GDR, where she studied with Heiner Carow; from 1997 to 2014, she held a professorship for direction at the Academy for Film and Television in Babelsberg. Her cinematic work often focuses on the fates of female protagonists. goEast will show her fiction feature LITTLE ANGEL (ENGELCHEN, Germany, 1996), about a young woman’s search for happiness, which received the German Critics’ Award in 1997.

The name Kida Khodr Ramadan was on everyone’s lips last year for his gripping portrayal of Ali “Toni” Hamady in the award-winning German series 4 BLOCKS. Now the celebrated actor is coming to goEast to present his directorial debut KANUN (Germany, 2018) at the traditional Matinee. In Ramadan’s film, an old, re-enflamed feud between two families calls for a vendetta according to the eponymous unwritten Albanian law of “kanun”.

At Schools goEast, a new joint project from goEast and Wiesbaden’s school board, school students will get to know Central and Eastern European film in the scope of cinema and museum visits and learn to engage critically with the medium of film.

This year’s programme includes BLOSSOM VALLEY by Hungarian director László Csuja. Csuja, who studied under Oscar®-nominated director Ildikó Enyedi (goEast jury president in 2018), tells the story of two teenagers making their way through Hungary with a kidnapped baby in this novel take on the road movie genre.

The goEast Specials promise first-rate cinema experiences once again, presented this year by the Fantastic Zagreb Film Festival. This festival, which takes place in summer and transforms Croatia’s capital into a gathering place for fans of fantastic cinema and related genres such as science fiction, horror and thrillers, will also provide for plenty of goose bumps in Wiesbaden – the programme includes a late night cinema screening of the Serbian science fiction film EDERLEZI RISING, featuring feminist adult film actress Stoya in the lead role.

goEast bids farewell to Lithuanian-born cinema master Jonas Mekas, who passed away on January 23rd 2019 at the age of 96. Before going on to collaborate with creative giants like Andy Warhol, Yoko Ono, John Lennon and Salvador Dalí in New York City of the 1960s and 70s and making a lasting impact on the American film scene with his experimental films and archive projects, Mekas lived for a time in Wiesbaden directly after the end of World War Two as a displaced person, while studying philosophy at the University of Mainz.

goEast is also paying tribute to Dušan Makavejev, a significant representative of Yugoslavian auteur cinema, whose contributions were central in defining the style of the Yugoslav Black Wave. In the early 1970s, his film about psychoanalyst and human sexuality researcher Wilhelm Reich, entitled W.R. – MISTERIJE ORGANIZMA (WR

– MYSTERIES OF THE ORGANISM, Yugoslavia, 1971), attracted considerable international attention. The film was banned in Yugoslavia and director Makavejev was threatened with a prison sentence. goEast would like to bid a fond farewell to Dušan Makavejev, who passed away in Belgrade on January 25th 2019.

Photo Exhibition: “Eastern Fairy Tales” by Frank Herfort In his pictures, German photographer Frank Herfort searches out clichés in everyday situations in Russia and Eastern Europe and debunks them with refreshingly incongruous stylistic choices: traditional “babushkas” and vodka swigging men on sleds collide with modern architecture or advertising billboards. Frank Herfort’s photographs possess a cinematic quality and each of his images tells a story – his “Eastern Fairy Tales”, on display at Museum Wiesbaden from April 10th to 16th, are at times epic, at times touching, often beautiful, and occasionally even downright bizarre.

Last modified on 2019-02-26
Tweet
More in this category: « goEast 2019: 10 - 16 April 2019 Encounters Between East and West at 19th Festival Edition // Pan-European Picnic // Symposium: Constructions of the Other – Roma and the Cinema of Central and Eastern Europe // Homage to Krzysztof Zanussi // New Award Kirill Serebrennikov’s Summer, a nostalgic ode to the Soviet underground rock scene to open Vilnius Film Festival »
back to top