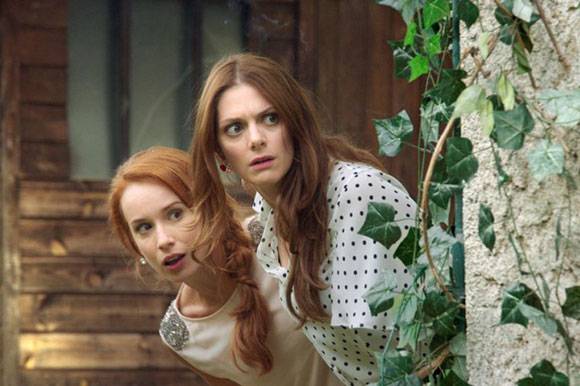 All or Nothing by Marta Ferencová

BRATISLAVA: Slovak films set box office records in domestic cinemas in 2017. The attendance of nearly 1.5 m admissions was the strongest in the history of independent Slovakia, since 1993.

One of the most successful films in 2017 was the crime-thriller The Line / Čiara, directed by Peter Bebjak, which together with the romantic comedy All or Nothing / Všetko alebo nič directed by Marta Ferencová,  topped the 300,000 admission mark.

Ten projects registered for the 20% cash rebate at the Slovak Audiovisual Fund in 2017, including the fourth season of the Netflix 13-episode series Outlander. The eased requierements implemented in 2017 attracted more international projects than in 2016, when four projects applied for incentives.

The Slovak Audovisual Fund together with the Ministry of Culture of the Slovak Republic decided to make major cuts to the requirements for minimum expenditure for international productions applying to the incentive scheme and launched a National Film Agency in August 2017 to work with incoming foreign productions.

After a long break since 2011, the acclaimed Slovak director Martin Šulík shot his new feature The Interpreter / Tlmočník, a Slovak/Czech/Austrian coproduction between Titanic production, In Film, coop99, RTVS and the Czech Television. The film will have its world premiere at the Berlinale and will be released in March 2018.

In 2016 four projects applied for cash rebates and two of them stepped into production in 2017. The TV mini-series Mária Terézia / Maria Theresia, a Slovak/Czech/Austrian/Hungarian coproduction directed by Robert Dornhelm and produced by Beta Film (Germany), MR Film (Austria) and Maya Production (CZ) in coproduction with the Slovak RTVS, the Czech TV, the Austrian ORF and the Hungarian MTVA, was released during the Christmas holidays.

The 13-part TV miniseries Inšpektor Max / Inspector Max, directed by Jaroslav Brabec and produced by Slovakia’s Trigon Production in coproduction with the Slovak RTVS and the Czech Television, was shot and finished in 2017, with the release set for January 2018.

According to Martin Šmatlák, the Director of AVF, three times more projects applied for the 20% cash rebate in 2017 compared to 2016. They will be shot throughout 2018. The fourth season of the 13-episode series Outlander, directed by the British Julian Holmes and produced by Netflix, will be shot in Slovakia for 30 days, as well as the US/Czech/Slovak coproduction Alleraya – The Falcon Princess, directed by Slovak Palo Janík Jr. (with  Filmpark production applying for rebates), InOut Studio’s 12-episode series Mistresses / Zamilované directed by Jakub Kroner, The Magic Quill  / Čertovské pero, directed by Marek Najbrt and produced by Czech Punk Film in coproduction with Trigon Production, RTVS, the Czech Television, Magic Lab, Michal Bauer and Barrandov Studios, and the three-episode miniseries directed by Peter Krištúfek and produced by PubRes in coproduction with Czech Evolution Films and T.H.A.

Slovakia’s 20% incentive scheme established in 2015 eased its requirements in August 2017. The minimum expenditure level was cut from 2 m EUR to 150,000 EUR for a single feature, documentary or animated film (with a minimum length of 70 minutes), and to 300,000 EUR for a project involving at least two such films or a television series (maximum 13 episodes of minimum 40 minutes).

Continental Film, a big distributor mostly of Hollywood productions, is also an important player in distributing domestic titles. In 2017 it released All or Nothing / Všetko alebo nič, directed by Marta Ferencová and produced by NUNEZ NFE s.r.o. in coproduction with Evita Film Production s.r.o. and MOJO Film s.r.o., Kidnapping directed by Mariana Čengel Solčanská, DOGG directed by Jonáš Karásek, Enrik Bistika, Slavomír Zrebný and Vilo Csino and The Third Wish / Tri želania, directed by Vít Karas and produced by the Czech Television in coproduction with Slovak TV Markíza and Promea Communication.

The young platform Filmtopia, which was launched in 2012, began distributing domestic films also on the web portal DAFilms. In 2017 Filmtopia distributed the documentaries Heavy Heart directed by Marek Šulík, Hotel Sunrise / Hotel Úsvit, directed by Mária Rumanová and produced by Punkchart Films in coproduction with RTVS, FTF VŠMU and kaleidoscope, and Varga, directed by Soňa Maletzová and produced by Punkchart Films, RTVS, the Czech Television and FAMU.

There is little Slovak participation in VOD platforms, although a lot of documentaries can be found on DAFilms. The main platform for Slovak films is Kinocola, while ASFK VOD, a VOD platform launched by the Association of Slovak Distributors in 2015, is handling international and domestic titles. Private Slovak television Markíza also releases its domestic series on Voyo.

According to Martin Šmatlák, 2017 was unique also in terms of participation in A-listed festivals. Slovak majority productions winning prizes in 2017 are: Little Harbour by Iveta Grófová - Generation KPlus prize at the Berlinale, The Line / Čiara, directed by Peter Bebjak and produced by Wandal Production in coproduction with Ukraine‘s Garnet International Media Group, RTVS, HomeMedia Production and Martin Kohút - best director at the Karlovy Vary IFF, Nina by Juraj Lehotský - Bronze Pyramid  at the Cairo IFF.

Also, the Slovak/Czech/Hungarian coproduction Out by Gyorgy Kristóf  had its premiere in Cannes’ Un Certain Regard, Filthy by Tereza Nvotová had its world premiere at Rotterdam’s Bright Future and the German/Slovak coproduction Freedom / Sloboda directed by Jan Speckenbach (produced by German ONE TWO FILMS, ZAK Film Production and Slovakia‘s BFILM) had its world premiere at the Locarno IFF.

By the end of 2017, Slovakia had 149 cinemas with 246 screens, of which 189 screens were already digitalised. They also include five alternative spaces for film screenings and 21 open-air theatres. Compared to 2016, the number of cinemas increased from 138 to 149 and the number of digitalised screens increased from 185 to 189. Slovakia also has one IMAX cinema, which was opened in 2015.

Several small art house cinemas operate in Bratislava. Kino Lumière, operated by the Slovak Film Institute, opened on the site of the former Charlie’s Centrum in September 2011. Mladosť, Nostalgia and Film Europe Cinema also add to the diversity of Bratislava's art house landscape, together with Kino Klap (located in the Academy of Performing Arts), Foajé and Kino Inak (a screening room hosted by the alternative cultural centre A4).

According to the Union of Film Distributors of the Slovak Republic (UFD ), the romantic comedy All or Nothing by Marta Ferencová was the most popular film in 2017 with 340,535 admissions, followed by The Line by Peter Bebjak with 329,349 admissions. In 2016 the most popular domestic title was the Czech/Slovak/Polish coproduction The Red Captain / Červený kapitán, directed by Michal Kollár and  produced by Fog´n Desire Films, in coproduction with Sokol Kollár, MD4, RTVS, Czech Television, Barrandov Studio, S Pro Alfa, Krakow Festival Office, and Kino 64 U hradeb, with 87,224 admissions.

The budget of AVF is provided in part by TV advertising revenues. In 2017, AVF registered ten projects for audiovisual industry support.

Slovakia’s 20% incentive scheme established in 2015 eased its requirements starting August 2017. The minimum expenditure level was cut from 2 m EUR to 150,000 EUR for a single feature, documentary or animated film (with a minimum length of 70 minutes) and to 300,000 EUR for a project involving at least two such films or a television series (maximum 13 episodes of minimum 40 minutes).

The Slovak Audovisual Fund together with the Ministry of Culture of the Slovak Republic launched a National Film Agency in August 2017, aiming to work with incoming foreign productions.

Another novelty is that one project cannot receive more than three grants from the Slovak Audiovisual Fund. However, minority coproductions and student films can receive only one grant from the AVF.

A new funding scheme of the Bratislava Self-Governing Region was launched in 2015 for supporting the culture in the region. In 2017 the scheme supported the distribution of Nina by Juraj Lehotský, The Line by Peter Bebjak, Little Harbour by Iveta Grófová and Filthy by Tereza Nvotová.

The primary sources of information on film are the Slovak Film Institute, which will celebrate its 55th anniversary in 2018, and the National Cinematographic Centre, through the specialised office of the Audiovisual Information Centre.

Audiovisual Information Center: Miroslav Ulman
This email address is being protected from spambots. You need JavaScript enabled to view it.
www.sfu.sk

Report by Alexandra Gabrižová (2018)
Sources: the Slovak Film Institute, the Slovak Audiovisual Fund, the Union of Film Distributors of the Slovak Republic