Interview with Violetta Kaminska, the Managing Director of the Independent Film Foundation 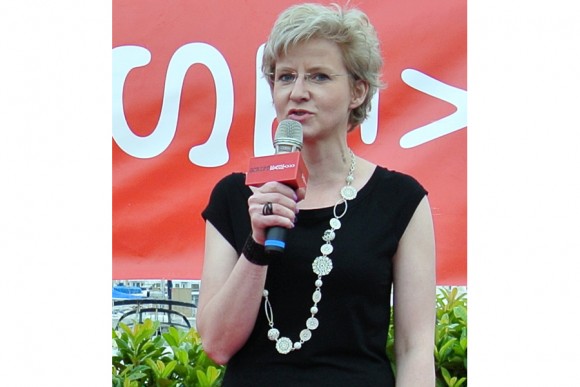 FNE: What is particular to ScripTeast and why it is important for a scriptwriter to have professional feedback?

Violetta Kaminska: It is partly a kind of confrontation of two worlds, the scriptwriters from Eastern Europe meeting advisors from outside Eastern Europe, who are successful beyond their countries, being Oscar or Palme d’Or winners, winners of European Film Academy Awards for best script, best film, best directing etc. We also have on board masters in selling films or making festivals, who judge films everyday, read scripts, evaluate them, etc.

This confrontation with the successful professionals and the best writers in Eastern Europe aims to let them see new potential in what they have written. We encourage writers to apply with possibly most advanced script. We then meet the scriptwriters and our advisors. It is always a mixture of generations and different cultures. Our advisors come from the Anglo-Saxon world, from German, French, Spanish, Italian or Nordic countries… The deeper the contrast in the melting pot,  the better, and we can help in the most effective way.

Our scriptwriters hear something they never realized about their own writing: how it could be received and how it could be understood or misunderstood outside their country. This is extremely important for them, because scriptwriting is a lonely job. You usually sit alone, sometimes with your co-writer, and you write something which is in your mind. That is why we make this confrontation with the most qualified readers at the writing stage, where the scripts can still improve. This is the main value of ScripTeast and this philosophy is bringing an enormously good result.

FNE: Do you make any distinction between young and established scriptwriters?

Violetta Kaminska: I don’t think that ScripTeast is strictly for either young or old writers. We had this question at the beginning when we received a submission from Judit Elek, the lovely director awarded a Special Jury Award in Cannes among many prizes. We said that our programme is a tool for the best writers. Is she the best scriptwriter? She is! So we invited her. We were very honoured by her application because we realized something that we had only assumed at the beginning, that even the very best scriptwriters from Eastern Europe need this kind of support.

FNE: How is the winner decided?

Violetta Kaminska: We ask the Advisory Board one question: “Out of those selected scripts from the year-long programme, which would you like to see first on screen?” A decision then has to be made. They all have a discussion about the scripts, together with our fantastic Heads of Studies, Christian Routh and Tom Abrams. It’s such a careful, sensitive discussion about the Eastern European creativity, and we are always proud to listen. There are a few rounds of voting and the list gradually gets shorter and shorter.

FNE: Do you have financing problems, as every training programme?

Violetta Kaminska: It is our great fortune to have the fantastic support of Creative Europe. And it has to be said loudly: without common Europe there would be no ScripTeast. Sometimes it is very difficult to gather the budget. My satisfaction with ScripTeast would be full if other public bodies from Eastern Europe would also become involved in funding, even on a low level. We intentionally do not accept many applications from Western Europe and at the same time we do our best to maintain a participation fee at a very low level compared to the benefits, not to accept any of the richest, but the best scriptwriters. It is great that for ten years the matching funds came from Poland. The impact that we have in all the Eastern European countries is obvious and would be good if the funding somehow reflected that.

FNE: What is your biggest accomplishment?

Violetta Kaminska: Every script that we invited we consider exceptional and if it is not made into a film,it hurts us a lot, and every script that is made into a successful film is our happiness! Eighteen films are produced and twelve are in production at the moment. We experience those successes all over the world in festivals, it’s the best reward we could get. I hope that all the writers trained by ScripTeast spread this knowledge of script expertise and they spread the self-confidence that Eastern European scriptwriting deserves.