Camerimage European Film Center To Be Built In Toruń Featured 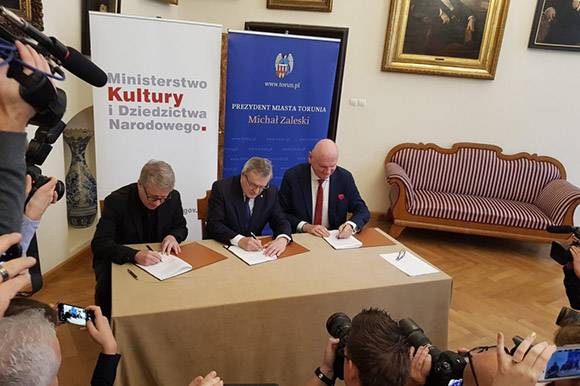 TORUŃ: The headquarters of the new Camerimage European Film Center is to be built in Toruń by 2025 as a joint investment of the National Treasury and the Municipality of Toruń. The investment is 181.5 EUR / 600 m PLN.

“The European Film Center and the EnergaCamerimage International Film Festival in Toruń will change the way Toruń is perceived internationally. We already have the support of the best known film institutions and big names in world cinema. Representatives of the American and European Film Academy want to come to Toruń and take part in the activities of the future European Film Center”, the President of the Tumult Foundation and the creator of the EnergaCamerimage IFF Marek Żydowicz told FNE.

The European Film Center is a new, state cultural institution dealing with the organisation of the EnergaCamerimage IFF and other film events on a European scale. The agreement for the building of the new centre was signed by the Vice-President of the Council of Ministers, Minister of Culture and National Heritage Piotr Gliński, the Mayor of Toruń Michał Zaleski and the President of the Tumult Foundation, creator of the Camerimage Festival Marek Żydowicz, in September 2019.

Two-thirds of the 181.5 EUR / 600 m PLN investment will be funded by the State Treasury, while the remaining funds will be provided by the City of Toruń. The agreement also regulates the issue of maintaining the Camerimage European Film Center as a cultural institution. The state subsidy for the Center’s activities will amount to 933,376 EUR / 4 m EUR per year. The City of Toruń will add the same amount.

The facility, headed by Kazimierz Suwała, will host the EnergaCamerimage IFF every year, and also various events related to film art and image culture, as well as external events. The institution's programme is currently being developed.

“The best and the most known Polish film festival, the treasure of the Polish culture, will finally have its home. We are finalising the first stage of a great and much needed investment in culture in Poland. The European Film Center and Camerimage Festival will not only be local. They will allow Toruń to develop on a nationwide, European and global scale”, Minister Piotr Gliński said in an official statement.