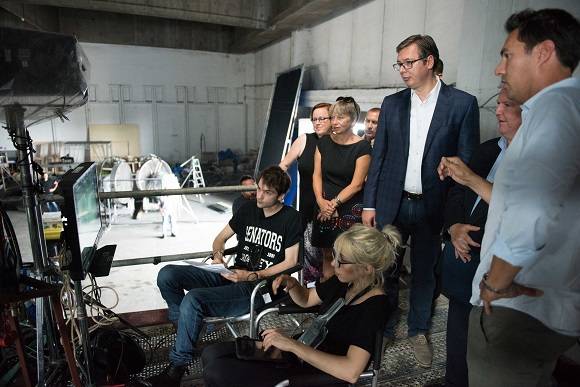 BELGRADE: USA- based French director Alexandre Aja has just started shooting his new feature film Crawl in the capital city of Serbia with Work in Progress company servicing. Sam Raimi and Rob Tapert are producing through Ghost House Pictures together with Alexandre Aja for Paramount Pictures. The film will be entirely shot in Belgrade.

Crawl stars Kaya Scodelario and Barry Pepper, and centres around a young woman who, while struggling to save her father during a hurricane, finds herself trapped inside a flooding house and has to fight for her life against Florida's most feared predators.

The total budget is 14.5 m EUR /17 million USD. Shooting will wrap beginning of September  2018. Crawl is benefiting from the Serbian cash rebates, which increased to 25% at the beginning of 2018.

On 30 July 2018 the president of Serbia Aleksandar Vučić visited the set together with the Ambassador of the USA in Serbia Kyle Scott.

Production Information:
Work in Progress
http://www.wipbelgrade.com/
This email address is being protected from spambots. You need JavaScript enabled to view it.